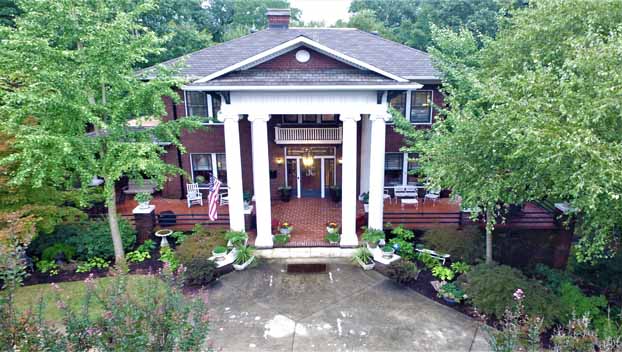 The first site is a traditional brick cottage owned by Alex Cockerham and Joshua Morton at 427 E. Cannon Ave., Albemarle. Alex and Joshua acquired the home in 2019 and became the home’s fourth owner. 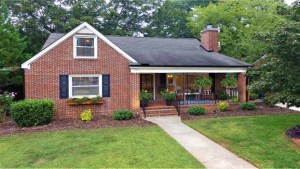 The home of Alex Cockerham and Joshua Morton is site 1 on the Holiday Tour of Homes.

The wood frame home was built in 1949 by Frank and Dorsey Trivette. During the late 1950s, the Trivette family constructed a full brick veneer exterior enhancing the home’s appearance. Mr. Trivette worked for a home supply company and won a contest from a brick supplier, thus acquiring the brick for the improvement. The Trivettes also added a rear addition in the 1970s.

Subsequent owners remodeled the den into a full living quarters, where a mud room at the side door was removed to expand the space. A kitchen pass-through was added from the kitchen to the den. The upstairs was renovated in the late 2000s and the downstairs guest bathroom was renovated in 2019.

Ticket holders will notice several notable architectural features in the home including a trap door in the hallway that provides crawlspace access, original hardwood flooring and the recently whitewashed brick fireplace surround. The architectural blueprints, as drawn by the Trivettes’ son, Roy, in 1968, are displayed in the dining room. The current owners define their interior design as a fusion of 1940s era charm with a modern twist.

The fourth site is the Neo-Classical Revival home of Austin and Megan King, at 271 E. Third St., Albemarle. The home was built by Andrew Columbus (A.C.) Huneycutt, who owned multiple regional newspapers. A.C. Huneycutt was also a lawyer in Albemarle and served as the mayor for a period of time.

The home was constructed in 1923, before the Armory, located beside it, now the Senior Center, and Albemarle High School, across the street, now Central Elementary.

Before the Kings purchased it, the home had been most recently owned by John and Nicole Williams from 2005 to 2019. During that time, various improvements were made, including a fully renovated kitchen in 2005, and a basement apartment, finished in 2012, which added another living area, kitchen, three bedrooms, two bathrooms and a laundry to the home.

The exterior of this home is all brick, boasting original wooden columns with iconic capitals, corbels under wooden soffit, original windows with wooden storm windows and a wrap-around front porch. A covered side porch was blown off during Hurricane Hugo in 1989 and never replaced. The King family says the porch will be making its return in the next few years.

Inside, the architecture of this home offers arts and crafts woodwork, coffered ceilings, two sunrooms and a screened-in porch. The décor is a blend of mid-century modern and arts and crafts styles.

The Kings were married in the backyard in 2015, so it is no wonder they boast of enjoying the beautiful, mature landscaping and the historical significance of this home.

If Christmas décor is what really draws you to these tours, the exterior of this home will be decorated with colorful lighting and wreaths, paying homage to Christmases past. The interior will feature themed rooms and bedrooms with numerous trees.

Tickets are $12 in advance and $15 the day of the event. Advance tickets and brochures with tour maps are available at Glory Beans Coffee House, Starnes Jewelers, Make It Personal and the ADDC Holiday Pop Up Shop, 113 S. 2nd St.
Tickets and brochures will be available the day of the tour at Glory Beans Coffee House, beginning at 1 p.m.

This year, as a courtesy to the homeowners, masks will be required to enter all residences. A mask will be provided for all ticket holders, to be picked up at the first site you choose to tour or you can provide your own.