Editor’s Note: Pfeiffer University’s Department of Nursing changed its policy regarding cutoff scores after Beck graduated. Students must now achieve at least a B average (83) for all tests they take during a semester. (The average had been 86.) This ensures that they are prepared to pass NCLEX.

Mara Beck, BSN, RN ’20 works in the Emergency Department of Atrium Health Stanly in Albemarle. After earning a Bachelor of Science in nursing from Pfeiffer University, she chose to remain in the local community to practice. 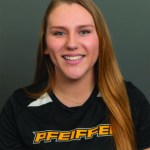 As Pfeiffer’s Division of Applied Health Sciences develops a focus on rural healthcare, Beck exemplifies the impact that it expects graduates of its programs to have in the rural communities surrounding the Misenheimer campus and throughout the region.

What’s more, “they care,” Beck said, describing Atrium Health Stanly’s small-is-beautiful culture, which is similar in feel to Pfeiffer’s. “They really want me to succeed. You can’t get that everywhere.”

Beck lives in Albemarle, where she feels comfortable at home, having visited the city often during her time at Pfeiffer. She hails from Chiefland, Florida, but has familial ties to North Carolina. She’s happy with her decisions to study nursing at Pfeiffer and then to work in a nearby hospital, attributing them to several factors:

When she was looking at nursing-friendly universities, her grandfather, Locust resident Don Russell, touted the nursing program at Pfeiffer and suggested that Beck visit the school’s Misenheimer campus. She did — and quickly sensed that everything about the place, which would include opportunities to play lacrosse and serve as an RA, would be a good fit for her.

Beck thrived in Pfeiffer’s nursing program because its small size meant small classes and lots of 1-on-1 attention. She also found her studies incredibly demanding: To ensure that students are prepared to pass the National Council Licensure Examination, the nationwide examination for the licensing of registered nurses, their average score for all tests must be 86 or higher. When Beck had difficulty mastering the material of a particular course at that level, she could count on the kind of extra help from her professors that turned a challenging situation around.

“The professors expect a lot from you, but they will help you get there,” she said.

Pfeiffer University gave Beck a taste of an urban hospital when, during the fall semester of her senior year, it arranged for her to intern in the emergency department of Atrium Health University City in Charlotte. She gave the experience mixed reviews. Although life there kept her on the go with something new to do each day, which she liked, the hospital was so big that “it scared me a little,” Beck said. “I feared I would get burned out. It was also easy to feel lost in the shuffle.”

During the spring semester of her senior year, Beck worked in the Behavioral Health Unit of Atrium Health Stanly. Her experience was positive and led her to consider her local career options.

“I really liked the hospital,” she said. “Everyone was very friendly. There was such kind staff in every department.”

This feeling has carried over to Beck’s current situation. For example, doctors seldom walk by her. Instead, wishing to help her advance in her profession, they are more apt to say, “Why don’t you come with me?” as they make their rounds.

“As a new nurse, I have a lot to learn,” Beck said. “If I want something bigger, I can have that later, but right now, Atrium Health Stanly is a great opportunity.”