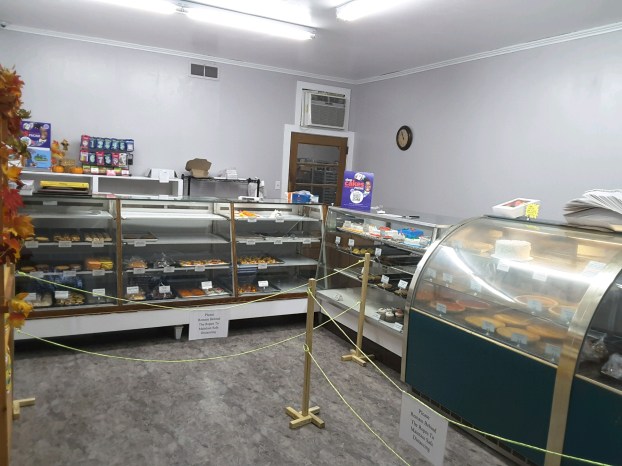 After being closed since March, Albemarle Sweet Shop reopens its newly-renovated lobby

After about seven months of being closed due to the pandemic, the Albemarle Sweet Shop reopened its lobby last Thursday.

Owner Shawn Oke said being closed had given him valuable time to prepare for the reopening, including installing a new floor and ceiling along with repainting the lobby.

“We figured we’d take advantage of being closed to spruce up the lobby,” he said.

Due to the small size of the lobby, only one family or group is allowed inside at a time. There are also barriers erected inside to allow the proper six feet of separation between customers and the employees. Patrons are also asked to wear masks when inside.

Oke has gone to great lengths to ensure the safety of both his staff and his customers because his greatest concern about bringing back his staff and reopening has been that people would get sick.

“I’ve told all our employees that if our customers won’t follow the guidelines and if they’re not going to be distanced and keep us safe then I’ll just close the lobby back down,” Oke said.

The Sweet Shop, which has been a staple in the Albemarle community for more than 100 years, first closed its doors at the end of March. Oke also had to furlough most of his employees, though almost all of them were brought back in September. The Sweet Shop currently has six employees.

The months the Sweet Shop was closed to customers was incredibly tough for Oke, since he knew how much buying clown cookies and cakes was such an important tradition in so many people’s lives. At the start of the pandemic in the spring, for example, Oke received a phone call from a loyal customer who was crying because for the first time in his life, he couldn’t get a Sweet Shop cake for his birthday.

“That’s when I stopped answering the phone because I’m like ‘I can’t take that,’ ” Oke said. “I just can’t take people being that distraught that they can’t get a cake.”

The Sweet Shop had to quickly adapt and shift its business to wholesale distribution, where products were sent to various businesses in the area including Corner Supermarket in Albemarle, Fast Stop in New London and Brooks Mill Farms. Customers also picked up treats at the shop after ordering them through Facebook or email.

“It really was comforting to see everybody come together to help each other out,” Oke said. “The fact that our customers continued to support us even though they couldn’t come here (inside the lobby), that means a lot.”

When evaluating when to reopen, Oke felt it important to do so before people start getting ramped up for the holidays. He said people have already begun ordering for Thanksgiving and Christmas.

“I felt a strong pull and a sense of urgency to get back open before the holidays because as bad as everything is, people need little bit of comfort and I think that’s something we provide,” Oke said.

While the Sweet Shop has been closed, Oke has created new treats like a Cheerwine custard and he’s currently working on an egg nog custard pie, which he hopes to finalize before Christmas.

While he contemplated permanently closing the shop from a business perspective, he never gave it much serious thought, considering what the Sweet Shop meant to the community.

“Seeing people now that we’ve reopened coming in and seeing how important it is for people to physically come here, it’s kind of humbling,” Oke said.

Commissioners to continue setting $1.5 million aside for proposed livestock arena

The Stanly County Board of Commissioners passed a motion this month to continue to keep money budgeted for the potential... read more