After much debate, Albemarle votes against issuing special permit for Christmas parade

In a narrow vote, the Albemarle City Council on Monday decided against issuing a special permit application to close several roads for a locally sponsored downtown Christmas parade.

Tiffany Dahle, owner of Tiffany’s at the Boardroom in downtown Albemarle, wanted to organize a parade as a way to promote downtown businesses and boost community morale. The parade would have been on Dec. 12 from 10 a.m. until noon and an estimated 25 vehicles would have participated with around 100 people in attendance, according to information included in the the application she completed.

Upon the recommendation of the Special Events Committee and city staff, the council agreed during the Nov. 2 council meeting to cancel the traditional Christmas parade organized by the city, though no formal motion was ever made. In place of the parade there will be several alternative activities, such as a virtual tree lighting and letters to Santa. 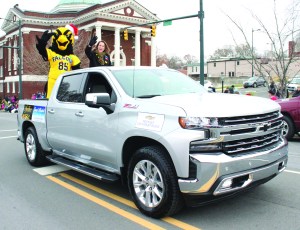 In lieu of the traditional parade being canceled, Dahle told the council that several business owners and community members in the city wanted to find a way to “uniquely and safely have a parade of some sort.”

Councilman Chris Bramlett made the motion, which was seconded by Councilman Dexter Townsend, to approve the permit and close the necessary roads (North First and Second streets from CB Crook Drive to South Street) contingent on Gov. Roy Cooper’s Phase 3 guidelines allowing such an event to take place. Under his current executive order, which went into effect Nov. 13, mass gatherings of more than 50 people outside in a single space is prohibited. Though the order is set to run through Dec. 4, there is a chance that, if the coronavirus pandemic worsens, the order could be extended.

“I’m not sure anybody understands what a blow this (the pandemic) has been to downtown businesses,” said Bramlett, who, like Dahle, also works downtown, at Starnes Jewelers. He expounded on his thoughts Tuesday morning in an interview with the Stanly News & Press.

“I think people forget that we need occasions like this to get people to identify with downtown and the many retail and dining opportunities there are there,” Bramlett said. “A parade brings people from all over the county and from outside the county to downtown and gives us that sense of identity that we need.”

Councilwoman Martha Hughes acknowledged that it would be confusing if the council passed Dahle’s permit while it previously canceled the traditional Christmas parade.

“I think it gives a mixed message to the community that we said no and now (would agree to the permit),” Hughes said. “It just looks a little muddled to me.”

Several council members were concerned that having such a large-scale event was risky given the current landscape of the pandemic, which is still infecting thousands of people each day in the state. North Carolina reported 3,288 new cases on Tuesday, bringing its cumulative total to more than 317,000. The percent positive, which has been increasing over the past few weeks, is currently 8.6 percent.

Shirley Lowder, who’s a registered nurse and a member of the Stanly County Consolidated Human Services Board, read aloud an email she wrote to the council stating she was “extremely opposed” to the event due to the “terrible virus” that has “raged our nation as well as Albemarle and Stanly County.”

In an interview with the SNAP, Lowder said she was concerned that a parade would be an easy opportunity for people to gather in groups, which could hasten the spread of the virus.

“When they’re tracing back cases, the Albemarle parade would be one of the big things that they (people who tested positive) would name that they’ve been involved with and we don’t even want the perception of having something that would spread the virus,” she said.

Councilman Bill Aldridge noted that while the Christmas parade is an event he looks forward to each year and while he doesn’t like canceling events, “we’re in an unbelievably tragic pandemic right now and statistics tell us the more the people are together the better chance of community spread.”

“I think that we have to be very abreast of the situation and we have to make sure that we’re setting a consistent message across the board,” Aldridge added.

Even though the pandemic has not gone away and is actually getting worse in many parts of the country, North Carolina included, Bramlett stressed that people can’t stop living.

Dahle told the SNAP that in the past the parade has been a source of major revenue for her and other downtown businesses because it draws such a crowd. Many of the businesses have struggled this year as a result of the pandemic.

While she acknowledges that it’s critically important that people take the coronavirus seriously and follow proper guidelines, she is concerned about the toll the pandemic has taken on people’s mental health.

“There are a large group of people who could really use seeing Santa ride down the street to remind them…that there’s still hope,” she said.

Even though a traditional parade will not happen, she said the city could still find creative alternatives like a reverse parade, with stationary floats, displays and other entries on display for viewing by spectators from their vehicles or a virtual parade, highlighting memories of years past.

After much back-and-forth, the council voted 4-3 against Bramlett’s motion. Martha Sue Hall, Martha Hughes, Bill Aldridge and Shirley Lowder voted against the motion while Bramlett, Dexter Townsend and Chris Whitley voted for it.

“Bad message, bad message,” Bramlett murmured after the vote was taken and his motion was defeated.