Tour of Homes to include two historic structures 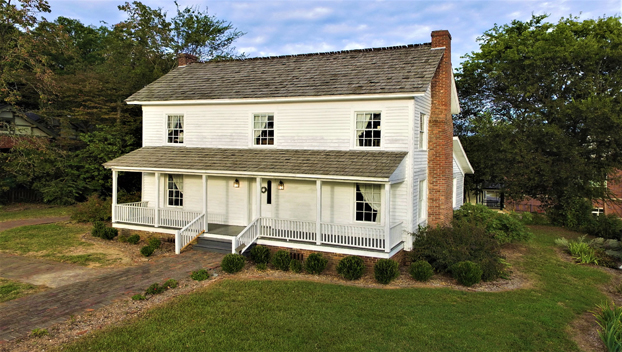 Eight historic sites, consisting of both private homes and event venues, will be open for touring. Proceeds from this event fund many of the downtown beautification projects sponsored by the ADDC.

Sites 2 and 3 on the Holiday Tour of Homes are two of the oldest houses in Albemarle. The houses, now owned and operated by the Stanly County Historical Society, have been decorated in all the gaiety of the Christmas season by members of the Society.

Site No. 2, the Isaiah W. ”Buck” Snuggs House, located at 112 N. Third St., is the oldest dwelling in Albemarle which still stands on its original lot.

Buck Snuggs, a wounded veteran of the Civil War, held several local governmental offices including treasurer, register of deeds and sheriff. He is best remembered as being sheriff during the lynching of Alec Whitley.

This house is unique in that the restoration exposes the evolution of the structure. During its 1970s restoration, sections of logs were left exposed and in recent restorations, a section of the original floors has been exposed.

The original structure was built as a one-room log building in 1852, with a second room being added around 1860. In 1873, Buck Snuggs purchased the property and added a second story to meet the needs of a growing family. Snuggs renovated his home to reflect the style of a prominent family. In 1974, the Stanly County Historical Preservation Commission renovated the house to serve as offices and exhibition space for a museum.

Volunteers from the Historical Society have chosen to decorate the Snuggs House with a myriad of Christmas decorations from the 20th century. Trees, as well as other holiday collectibles, will grace each of the rooms. In addition to the traditional trees, an elegant white flocked tree and a 1960s aluminum tree are included. 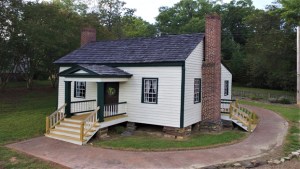 The Freeman-Marks House, one of the oldest in the county, sits on the rear portion of the Snuggs House lot and faces East Main Street. This house is estimated to have been constructed between 1820 and 1840.

The Freeman-Marks House reportedly has wandered from the edge of the newly-formed city of Albemarle to its current location. Daniel Freeman had owned a structure along the Old Concord Road (South Street) which may have been his dwelling.

In 1847, Freeman purchased a lot adjoining the town square and it is speculated that this structure was moved to the uptown location and occupied by Daniel’s son, A. C. Freeman, as his residence. It stood in the vicinity of what is now Courthouse Square Park and faced south. This was a prime location to conduct business in a thriving new town. The house was later used as a general store, law office and doctor’s office.

In 1884, it was purchased by Whitson A. Marks. The Marks family resided in the house until 1906. As Whitson Marks’ ventures thrived, he built a brick building north of Courthouse Square Park and moved this structure behind that building. It was used as rental property until it became uninhabitable.

In the 1970s, the last living Marks daughter and her niece donated the structure to the Stanly County Historical Preservation Commission. The Commission relocated the Freeman-Marks House to the rear portion of the Buck Snuggs property and restored it as the stylish Federal cottage that would have been occupied by the prominent Freeman and Marks families. This house will be decorated with natural materials and fruit that would have been available to a family in the 19th century.

In April, Stanly County government conveyed these historic houses to the Stanly County Historical Society. The Society has since made numerous repairs and improvements. Both the Isaiah W. Snuggs House and Freeman-Marks House have been placed on the National Register of Historic Places.

Tickets are $12 in advance and $15 the day of the event. Advance tickets and brochures with tour maps are available at Glory Beans Coffee House, Starnes Jewelers, Make It Personal, and the ADDC Holiday Pop Up Shop, at 113 S. 2nd St.

Tickets and brochures will be available the day of the tour at Glory Beans Coffee House, beginning at 1 p.m.

This year, as a courtesy to homeowners, masks will be required to enter all residences. A mask will be provided for all ticket holders, to be picked up at the first site you choose to tour; or you can provide your own.