More than $18.5 million invested into Albemarle downtown during fiscal year 2019-2020 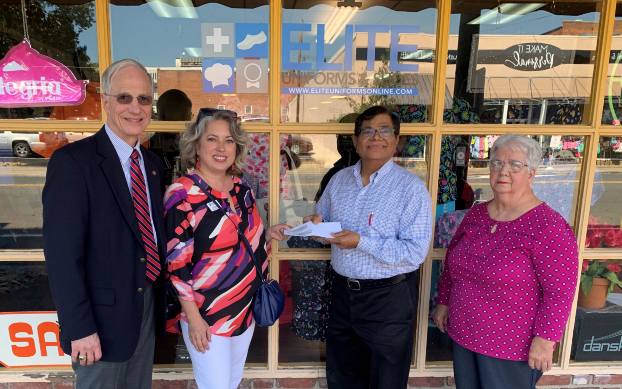 In discussing the Albemarle Downtown Development Corporation’s annual report for the 2019-2020 fiscal year, Joy Almond told the Albemarle City Council recently that roughly $18.6 million had been invested into the downtown.

The majority of the private investment, which totaled almost $15 million, came from Pfeiffer University for its new health sciences facility, which was around $11 million. Almond said the remaining expenses were a combination of 15 private property purchases and smaller repairs made collectively by other private properties within the Municipal Service District (MSD)

Public investment was around $3.8 million, the bulk of which went into repurposing the former Home Savings and Loan (Pinnacle Bank) building at the corner of First and South streets into the new Albemarle Police Department headquarters. The remaining expenses were for restriping of parking areas along Third and North streets, as well as some parking lot improvements made by the county at the Stanly County Courthouse.

Almond said to the best of her knowledge, the $18 million invested in in the past fiscal year was the most on record. The two previous fiscal years resulted in around $3 million each in total investment.

Almond reported that five new businesses opened in downtown during 2019-2020. They include: @ the Shop, Lantern Realty & Development, Lancaire Heating and Cooling, First Bank Insurance Services and The Talent Company. Two other business, The Yoga Pilates Barre and Bear Insurance Service (which was bought out by First Bank) closed and three businesses, Truth & Table, Larry McGuire Realty and Albemarle Printers, expanded their operations.

A total of 16 new jobs in the downtown area were created while 14 jobs were lost. Four part-time jobs were created and the same number were lost. Lancaire Heating and Cooling, which moved into the former Main Street Pool Supply building, added eight full-time and two part-time jobs. The buyout of Bear Insurance Service by First Bank Insurance Services resulted in an additional two full-time jobs.

In terms of community involvement, citizens combined for 439 volunteer hours, which came in many forms including downtown community meetings, assistance during key events and beautification projects. Almond said NC Main Street values each hour at $24.19, so these volunteer hours have a dollar worth of $10,619.41. Fiscal year 2019-2020 saw an increase in hours compared to 2018-2019, when citizens banked 351 volunteer hours. Some of the volunteer events included repainting the sculptures outside of Stanly County Public Library’s main branch in Albemarle and helping with the Winter Wine Festival in February.

“We couldn’t do a lot of the work that we do without our volunteers,” Almond said.

The ADDC has also been helping businesses stay afloat during the coronavirus pandemic by creating online shopping and restaurant guides on its website, using social media to keep the community informed of updates regarding any changing business hours and providing signage to businesses for curbside pickup.