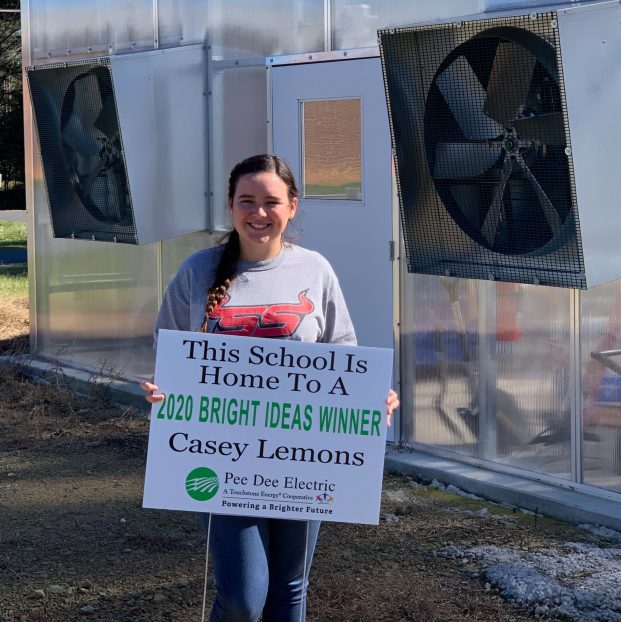 South Stanly High School agriculture teacher Casey Lemons received a $2,000 grant from Pee Dee Electric, which will allow her to purchase chickens and built a chicken coop for her classes. Photo courtesy of Casey Lemons.

Though Casey Lemons teaches two animal sciences classes at South Stanly High School, there’s something missing from her courses: she has no animals, “which makes it a little hard to teach animal science without any hands-on experience.”

In order to help change this, she applied for and recently received a $2,000 Bright Ideas grant from Pee Dee Electric which will go towards purchasing chickens and the materials necessary to build a chicken coop for her classes.

She plans to have her students get in groups to design their ideal chicken coop. The students will vote on the best design and then, with help from the carpentry class, they will actually build the coop.

The grant money will fund most of the project including key materials such as lumber, chicken wire and chicken feed. The materials won’t be purchased until the students decide on the final design.

Being able to have chickens on campus will also benefit other areas of the school: Lemons, for example, plans on providing eggs to the Foods and Nutrition teacher to help with her classes.

Lemons didn’t even realize she had won the grant until a representative announced her name during a teachers’ meeting at the end of October.

“It was a good surprise,” she said.

A first-year teacher, Lemons, who went to North Stanly, graduated from N.C. State with a degree in Agricultural Education with minors in Animal Science and Agricultural Business. In addition to teaching animal science, she also teaches horticulture. She’s also in charge of a new agriculture program at South Stanly where students can raise plants using aquaponics inside a greenhouse.