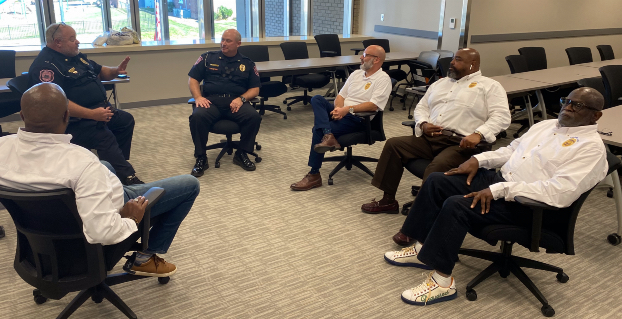 To better meet the needs of its officers and to address any struggles they may be going through, the Albemarle Police Department recently recruited several local pastors to revamp its chaplain’s program.

While clergy members had been available to officers in the past, it was always in response to a stressful event or situation. For much of this year, Police Chief David Dulin has been working to establish a program that would be more proactive and attentive to the needs of his officers.

The pastors were officially sworn in as official police chaplains a few weeks ago.

“Our goal is to have for the community and my officers someone that they can turn to for assistance with everyday stressors, whether it’s on the job or whether it’s personal,” said Dulin. “It’s just a pillar that we’re trying to utilize to look after the wellness of our officers and the community.”

The program is modeled after the Chaplaincy Unit within the Charlotte Mecklenburg Police Department. One of the pastors of the Charlotte program, Theopelis Schaffer, recently spoke with the five pastors as part of their training.

“They trained them on what to expect from officers, how to help the officers and how to be there for them,” said Albemarle Police Sgt. Star Gaines, who works with the pastors in her role as community liaison for the department.

Dulin and Gaines began meeting at the beginning of the year to develop a program that would allow officers a chance to talk with faith leaders in the community about any struggles or problems they might be dealing with. Gaines said the killing of George Floyd in Minneapolis at the hands of the police during the summer only hastened their efforts to create a program that could diffuse any possible tensions between officers and the community that could lead to a similar scenario.

“It’s a preventative measure to stop something like what happened in Minnesota from happening here in Albemarle,” Medley said. “It’s through relationships and communication.”

Getting to know the officers

While the program is still in its infancy, the pastors — who each have special identification cards that allow them access inside police headquarters, where they share an office — are currently spending time introducing themselves to the officers and establishing a rapport with them.

Each of the pastors understands the importance of helping to alleviate any stressors or burdens that officers might be dealing with and so any conversation between an officer and pastor is strictly confidential and will not be shared with anyone else.

“The worst thing you can do when someone has confidence in you is to go out and betray that confidence,” Richardson said.

“I plan on being here at least two to three days a week, just to get to know some of the officers and for them to get to know me,” Medley said, adding that thus far, the officers have been very cordial and accepting of him and the other pastors. “We feel like we belong already.”

Though there is no definitive timeline, once the trust between the officers and chaplains has grown and solidified, the pastors will participate in ride-alongs with officers to serve as liaisons between APD and the community.

While most of the pastors are originally from the area, many of them live outside county lines and travel a good distance to get to police headquarters each week. Richardson, for instance, lives in Jamestown near Greensboro, which is more than an hour away.

In addition to talking with the officers, the pastors are using this time to get acclimated to working in an unfamiliar environment. Having no experience with law enforcement, “this is all new for us,” Medley said.

Though Hatley, like many of the other pastors, has informally worked with and provided guidance to officers in the past, and has several officers from various departments attend his church, this is his first time working alongside APD in an official role.

“I’ve seen the needs in the past (for a chaplains program) so to be able to have this in a capacity where we’re on site, we can be here, we can go out on ride-alongs, I think…is going to give us a greater level of encouragement and support to our officers and to one another,” Hatley said.

One of the officers, still not fully comprehending the program, recently asked Gaines what the pastors were doing at APD.

“I said they’re there for you,” she told the officer. “If there’s any need that needs to be met by you, as far as needing someone to go with you to the doctor’s appointment…or praying for you and your family, anything you need, just talk to them and they’ll be there for you.”

“We need one another”

Even though the officers have each other and their families to lean on during moments of stress, it’s still nice to have a trained group of people willing to listen and offer guidance and advice.

“We all need that person to go to” when times get tough, Assistant Police Chief Jesse Huneycutt said. “There’s been times in my career as an officer over the years where I needed that spiritual awareness…and that go-to person.”

In addition to providing support for the officers, the pastors can also learn information from people in the community, including in their own churches, about how improvements can be made to fortify the relationship between the residents of Albemarle and the department.

“Everything can be strengthened,” Brian Johnson said.

In June, for example, a few weeks after the death of George Floyd, representatives from the law enforcement community, elected officials and local clergy hosted an open forum on race relations titled “Bridge the Gap.” The forum, which was hosted by Johnson, gave citizens the opportunity to voice their opinions to law enforcement officials regarding their experiences and concerns on topics related to race relations.

The pastors noted that the chaplaincy program will benefit both the department and the community because both groups will be able to learn more about the other.

“It’s actually both for the community to learn the different positions and posture of the police as well as the police learning about the diversities and populations within the community,” Johnson said.

Gaines stressed that the police department can only be enhanced by interacting with the public.

“We want to get out in the community, along with our chaplains, and find ways of helping our community to make it better.”

As someone who works professionally as both a counselor and a pastor, Johnson stressed that forging healthy relationships is critical in order to foster trust and to grow in an increasingly interdependent world.

“I believe in society that we’ve reached the point where relationship is essential no matter what area of service,” he said. “This chaplaincy program solidifies that reality that we need one another.”

By getting to know the officers, the pastors hope to restore some of the respect and trust for law enforcement that has been lost over the years by segments of the population. By working to humanize police officers and letting young people know how best to interact with them, they can work to diffuse any underlying tensions or issues that could eventually erupt into violence.

“Maybe we can restore some of the trust between the police department and the community and we can start in our own churches,” Medley said.

While the pastors are used to serving the public in the context of their duties at their respective churches, they all acknowledged that their work with APD is simply an extension of their call to help others.

“I don’t think you can take Christianity or who we are as believers and separate that out from what we do,” Hatley said. “Christ himself said he didn’t come to be served but to serve…and so it is our privilege to serve him by serving others, wherever it is that he gives us an assignment or calls us to….”

The pastors are looking forward to fostering relationships with the men and women who work each day to ensure the safety of the citizens of Albemarle.

“We get to serve those who serve us,” Hatley said.