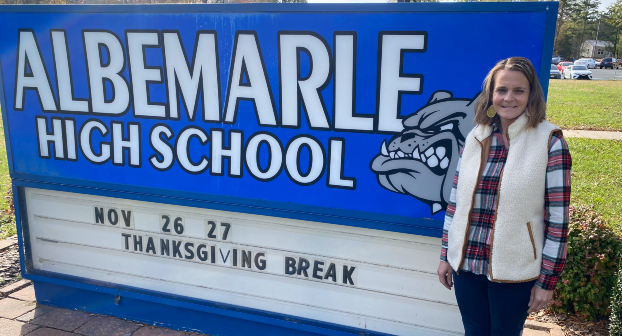 Emily Shaw will leave her post as principal at Albemarle High School at the end of the year to become the director of secondary and CTE education at Montgomery County Schools.

After almost three years as principal at Albemarle High School, Emily Shaw will leave at the end of the year for a new position with Montgomery County Schools.

She said her final day at Albemarle High will be Jan. 1. Her new position will be director of secondary and CTE education.

Though she wasn’t necessarily planning on leaving the school, Shaw, who is pursuing her doctorate of education at UNC Charlotte, saw the job posting on her computer and thought it would be a good opportunity to further her experiences as an educator.

“I absolutely love being a principal, but I felt like I could make a difference in a different capacity,” she said.

During her time at Albemarle, which was struggling when she first arrived, the school has improved in many metrics: it went from receiving a “D” performance grade in 2017 to “C” grades in both 2018 and 2019 and the academic growth has consistently increased. For the 2018-2019 school year, Albemarle received a growth score of 66.9, its highest since 2014 and only a few points shy of a 70, which indicates a school is meeting growth. Albemarle also improved its graduation rate during Shaw’s tenure.

What excites her about her new position is working with high school students at the new Montgomery Central High School and forging a strong relationship between the school and Montgomery Community College. She noted her experience working with Stanly Community College as part of the Career and College Promise program, where high school students can earn free college credits, will aid her in her new position.

Her ultimate goal, she said, would be to eventually become a superintendent, but with two school-age children, “the timing’s got to be right.”

The new principal position has been posted and Superintendent Dr. Jarrod Dennis and Assistant Superintendent of Human Resources & Student Services Vicki Calvert have met with the staff and will continue to seek their input in looking for Shaw’s replacement.

“Mrs. Shaw has always had a drive within her to push for excellence and do what is best for students,” said Calvert. “I’ve had the opportunity to observe her as a teacher, an assistant principal and a principal. No matter the job she was doing, she has consistently been fully dedicated to the students she was serving. She has made a difference in Stanly County Schools and she will be missed.”

‘She has brought joy back to learning’

A Stanly County native, Shaw has worked in the school system for 17 years, first as a language arts teacher at the old Running Creek Elementary and West Stanly Middle, before transitioning to administration where she was assistant principal at West Stanly High and Norwood Elementary before coming to Albemarle.

Even though she’s a West Stanly graduate and grew up rooting against Albemarle, she said she could not picture herself being principal at any other school.

“The students here, the community, everyone is just so supportive and welcoming,” she said.

While she will miss her students and the connections she’s forged with them, she also stressed the importance of the staff that’s she’s gotten to know and care for during her time at the school.

“They’ve just shown me what it’s like to really enjoy a job,” she said. “They make learning fun, they make work fun. These are some of the hardest working staff members that I’ve ever worked with in my life.”

Her staff feels the same way. 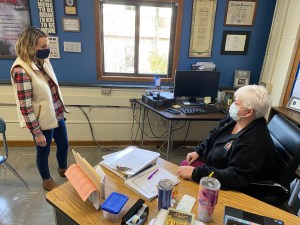 During her time as principal, she’s worked to form a stronger relationship between the school and the city, which was something that was lacking when she first arrived. She frequently communicates with the mayor and city council members to keep them abreast of all the things going on at the school.

“It’s all about networking and building those bridges and closing those gaps between us and the community and getting people to understand that Albemarle High School is not a school full of bad students,” she said. “We are a great place and we have great staff and great students.”

Shaw believes that Albemarle has a bright future and expects several key data points — including the school’s graduation rate and academic growth score — to continue to improve in the coming years.

Her favorite part of being an educator has been making a difference in the lives of her students and she always relishes when former students come back to see her.

“If I can just make a difference in one child’s life then I’m a success.”