“It is not sustainable”: Medical workers express concern as pandemic rages on

With much of the country experiencing record levels of coronavirus cases and hospitalizations, the pandemic is arguably worse than it’s ever been. Across the country, more than 100,000 people are currently hospitalized while roughly 1.8 million new cases were reported Dec. 3, according to data from the COVID Tracking Project. Roughly 275,000 people have died from the virus.

North Carolina recently passed 5,000 deaths while 5,637 new cases were recorded Thursday, the highest one-day total since the pandemic began according to the state’s Department of Health and Human Services. Hospitalizations also hit a new record Thursday, with DHHS reporting 2,101 patients with the virus statewide.

Though the pandemic is not nearly as bad in Stanly as in other counties in the state, it recently surpassed 3,000 cases. As of Thursday, 15 people in the county are hospitalized while 81 have died. There have also been two cases of people who previously had the virus getting reinfected.

Atrium Health Stanly physician Jenny Hinson said that even though she feels safe working at the hospital due to its effort acquiring necessary PPE and implementing safety measures to keep patients and employees safe, it’s still not easy. She can no longer hug her patients when they’re crying and “they can’t see my facial expression to know that I’m hurting with them.”

She said the increasing number of hospitalizations across the state, especially in the Charlotte metro region, has an effect on rural counties like Stanly. 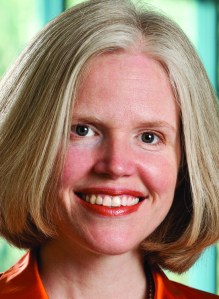 Hinson expects the number of cases to continue to increase in Stanly due to the prevalence of the virus within the community, and because it’s harder to gather outside, where virus is less likely to spread, due to the colder weather.

With several proven vaccines set to roll out in the coming weeks and with more people wearing masks in public, Hinson is optimistic that the pandemic will eventually go away sometime next year, but until then she encourages people to keep safe and follow appropriate guidelines.

“For these next few weeks I urge people to get take out instead of dining, and to avoid gathering indoors,” she said.

The Stanly News & Press also reached out to two Stanly natives who are nurses in other parts of the country, and who spoke to the SNAP a few months ago, to get an update on how the virus is impacting their communities.

Pandemic is getting worse near nation’s capital

New London native Darrell Little has spent more than four decades working as a nurse all over the country, though the majority of his medical career has been in Maryland, where he’s lived since 1985. He’s currently a critical care nurse at MedStar Southern Maryland Hospital Center in Clinton, about 30 minutes from Washington, D.C. He also works at United Medical Center in D.C., where he provides vascular access service, and with Chesapeake Mobile Healthcare, where he travels to regional nursing homes and additional medical centers to help residents that have contracted COVID-19. In total, Little works about 60 hours a week.

When the SNAP talked with him in May, MedStar was quite overwhelmed with coronavirus patients: 90 percent of the ICU beds on his unit were occupied with patients infected with the virus and he estimated at the time that about 95 percent of his patients had contracted the virus.

While cases seemed to have hit their peak during the early summer and had gradually been decreasing, he told the SNAP that cases have spiked over the past few weeks. He estimates there are around 10 to 12 patients currently in the ICU, a major increase from last month, when he said there was roughly one to two patients.

Though he’s not sure what exactly explains the recent increase, he thinks it might have something to do with people spending more time indoors, where the coronavirus more easily spreads, due to the colder temperatures. He also suggested the declining number of cases over the past few months could have created a sense of complacency where people felt comfortable being around others without wearing masks.

Prince George’s County, the state’s second-most populous county where MedStar is located, has roughly 42,500 confirmed cases, the most in the state, along with 927 deaths, according to the county’s Department of Health. The county’s most recent seven-day testing positivity rate was 9.2 percent, the highest since the summer, while 145 people were hospitalized last week, the highest weekly total since May.

Even though Little wears a mask at all times during his shifts (which can extend beyond 12 hours) and takes all necessary precautions when out in public, the possibility of becoming infected is always on his mind.

“It fuels your anxiety and it increases your paranoia,” he said. “You don’t really feel comfortable going out.” 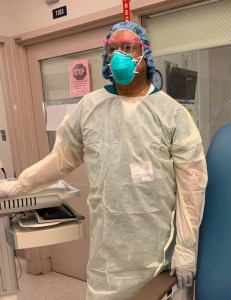 What makes COVID-19 the worst disease he’s ever experienced — and he’s dealt with with tuberculosis, the HIV/Aids epidemic and anthrax — is it’s high transmissibility. Many people who have the virus are asymptomatic and often don’t realize they have it before transmitting it to others.

“No other disease do you have to keep your guard up” at all times, he said. He added that whenever people do make mistakes like not socially distancing or wearing a mask, they are “gambling with their own lives.”

His family worries about him, too. Though incredibly proud of her father, U.S. Army Maj. Terez Little said it’s a “double-edged sword” knowing Little is on the frontlines, interacting with patients who have the virus.

“Whenever I think about him placing himself in danger for a job that he has passion for and that he has done really well in…it does bring me daily worry, daily concern,” she said. “But at the same time I know that he’s gonna exercise every measure possible to keep himself and my mother safe.”

As a traveling nurse, Albemarle native Jennifer Sykes Baker has been busy treating coronavirus patients since March, when she first came to work at Yale New Haven Hospital in New Haven, Connecticut. The state, like many in the Northeast, was heavily hit by the virus from the very outset in mid-March.

Though cases had decreased after the initial surge during the spring, over the past month, Sykes Baker told the SNAP that her hospital has experienced a “huge spike” in coronavirus cases.

Connecticut surpassed more than 2,000 daily cases in early November, the highest total since the pandemic began, though the numbers have begun to gradually decline over the past few weeks, according to data from the state’s health department. Hospitalizations, after flattening for much of the summer and early fall, skyrocketed in October and November to levels not seen since the spring. Though a lagging indicator, deaths have also begun to increase. New Haven County has roughly 32,000 cases, second-most in the state behind only Fairfax.

The reality is that while doctors and nurses have more knowledge about how to treat the virus and have been able to keep more people from getting seriously sick and dying, due to the strain of the current surge, there has been a scarcity in available hospital staff.

When the SNAP first talked with Sykes Baker at the end of June, when the hospital was beginning to see a slowdown in cases, there were about 10 nurses on her unit, each taking care of two to three patients. With the recent increase in cases, her unit has been reduced to about five nurses — with each now taking care of four patients. And the 22 ICU beds are filled to capacity with COVID patients.

“The help that we had in the beginning is not what we have now,” Sykes Baker said.

She typically works 40-hour weeks, though many of her shifts often last up to 14 hours.

With so many healthcare workers feeling tired and fatigued, treating more patients than they’re used to, she fears nurses will eventually hit a breaking point.

“It is not sustainable,” she said about the current environment at her hospital, noting that many medical workers are feeling burned out.

“I think it’s just like, when is it going to end?” she said about the pandemic that’s lasted about nine months with no signs of slowing down. “You can’t day in and day out go in and continue to take care of that many Covid patients on a daily basis without a lot of help.” 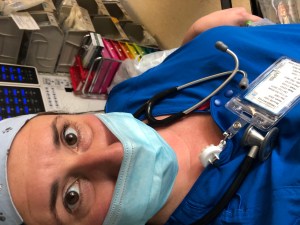 In order to rest and take care of her own health, Sykes Baker has been spending some time in Stanly County. She’s set to return to Connecticut this week.

As a nurse working on a COVID unit, Sykes Baker has had to intubate patients and put them on ventilators; she’s also been around patients in their final moments, alone in a room without the support of loved ones. Though she continues to work and perform her duties, the grim reality of life as a nurse on the frontlines is never lost on her.

“If you ever get numb or the death of a human being doesn’t ever move you or touch you in a different way, then you don’t need to be a nurse anymore,” she said.

Sykes Baker recently treated an elderly man who had just lost his wife of more than 50 years from the virus. She spent time in his room, where he was by himself, offering him comforting words. Eventually he stopped eating and began crying. Suited up with her protective gear, she asked him what was wrong.

“I’m scared,” she recalled the man told her. “And I thought, ‘Man, you just pulled at my last heartstring and I’m about to lose it right here,’ ” she said.

While the man technically died a few days later from the virus,  Sykes Baker thinks he also died from a broken heart, after losing his wife and being alone.

As a simple way to help curb the influx of new cases and to prevent more people from getting seriously sick and dying, Sykes Baker encourages people to continue wearing masks when out in public.

Wearing a mask is also a way of showing empathy for other people — especially those that have been infected and are fighting to stay alive.

“It’s not a political statement,” she said about mask-wearing, “it’s about being a human being and protecting your brothers and sisters that are out in the community.”