Stanly County has historically been one of the more reliable Republican strongholds in the state, where GOP candidates — from presidential hopefuls to those running for county commissioner — have handily defeated their Democratic opponents. There are twice as many Republicans as Democrats registered in Stanly and the majority of political officials representing the county, both locally and in Raleigh, are Republican.

Every GOP candidate on the ballot this year easily won in Stanly, with margins often exceeding 75 percent. President Donald Trump garnered 75 percent of the vote, while Carla Poplin, who ran for a seat on the school board, received 76 percent of the vote. For candidates on the ballot in Stanly, it seems their political affiliations, as opposed to their policies or backgrounds, is often the key factor that decides elections.

But in a sea of red, there has always been one small, reliable speck of blue. Of Stanly’s 22 precincts, 21 voted for Republican candidates this year, but the other, the 8th precinct, bucked the trend and consistently supported the Democratic candidates — and often by wide margins. President-elect Joe Biden received 85 percent of the vote while Elizabeth Harrison, Carla Poplin’s opponent for school board, garnered 85 percent of the vote.

This trend has held true in previous election cycles as well. In 2018, for instance, the 8th precinct was the only one that voted for Oscar Banks (Sonny) Hinson, Jr. over Jeff Crisco for Sheriff, while in 2016, it was the only one to support Tempest Green Leake over Ryan McIntyre for a seat on the board of education. 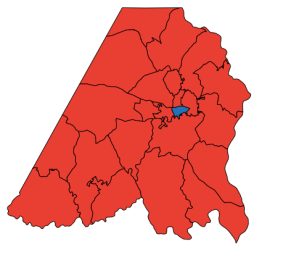 The 8th precinct, which is comprised of predominantly Black residents, encompasses the neighborhoods in South Albemarle and a portion of East Albemarle largely between Main Street to the south and N.C. Highway 24-27 to the north. The polling place is at the E.E. Waddell Center. Black voters have historically been a key constituency within the Democratic Party. According to exit polls for the presidential election, Biden attracted about 87 percent of the Black vote in the country, the highest vote share of any racial group.

Much of South Albemarle is focused around an area called Kingville. It was named after Dr. Ogden Doremus King who moved to the city from Wilmington in the late 19th century to practice medicine. He was instrumental in helping to build up the Black community in the area. The Waddell Center was named after Elbert Edwin “E.E.” Waddell, who was principal at Kingville High School for more than 20 years.

While Kevin Taylor, chairman of the Stanly County Democratic Party, did not know about the precinct’s strong maverick tendencies of going against the political grain, he wasn’t surprised. He said the party’s two strongest areas in the county are the 8th precinct and the 3rd precinct, which is also in Albemarle, though it supported Republican candidates this year.

She said the precinct is composed of around 1,400 voters.

“Our precinct takes pride in being a Democratic precinct.”

Though her husband Tidus Stanback was the first African-American elected to the Albemarle City Council, she has no interest in running for political office herself.

“I have never run for anything because I have always helped everybody else,” she said. “I feel like I’m more effective on the outside than I am on the inside.”

Albemarle Councilman Dexter Townsend, who resides in the precinct, said as far back as he can remember, voters have almost always supported the Democratic candidates, though occasionally exceptions can arise. He noted that the constituents in the 8th precinct are pragmatic and don’t necessarily hold preconceived notions that by candidates simply being associated with the political party, they will easily win the precinct; rather, he said the people support candidates who they feel are going to best represent their needs.

A good example of the precinct’s pragmatism played out in the Albemarle City Council election, which featured a five-person race for two seats. Though incumbent Chris Bramlett, a Republican, narrowly lost to former councilman Benton Dry, a Democrat, he did outperform him in the 8th precinct, where Bramlett received the second-most votes.

Many of the residents of the precinct often attend get-out-the-vote events and churches in the community also encourage people to register to vote and make their voices heard. Many candidates will also stop by to visit local churches, barbershops and even individual households, Townsend said.

“Even in this pandemic, we’ve done a lot of virtual Zoom meetings with different organizations…as far as which candidates represent our best interests,” he said.

While James-Stanback and Townsend know the 8th precinct does not play a decisive role in determining races in Stanly, they still take pride knowing that it prevents the county’s electoral map, with its 22 precincts, from turning 100 percent red, much to the chagrin of Republicans in the area.

“We’re not going to conform to what others are doing simply because that’s the way it is in this county,” James-Stanback said.

She takes special delight in knowing that her precinct was the only one in the county that supported the soon-to-be president, Joe Biden.

“We know that our votes count when it’s a general election and we take pride in that because we know that if the Democratic party wins statewide or nationally, we were instrumental in helping,” James-Stanback said.