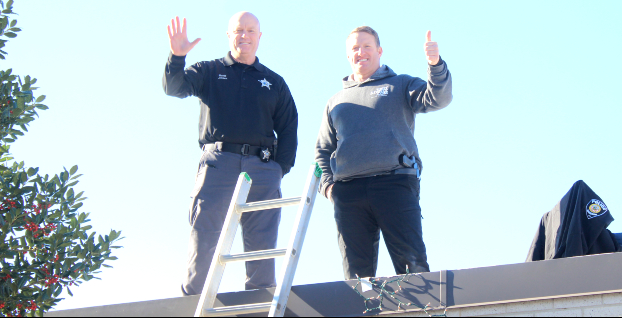 Stanly County Sheriff Jeff Crisco (left) and Oakboro Police Chief T.J. Smith are all smiles while standing atop the roof of Napa Auto Parts in Oakboro. (Photo by Charles Curcio/staff)

Oakboro Police Chief T.J. Smith joined forces with Stanly County Sheriff Jeff Crisco and others high atop the roof of the Napa Auto Parts store on Main Street in Oakboro for a toy and donation drive Wednesday.

Early in the morning, Smith and Crisco made the trek up a 10-foot ladder to climb onto the top of the roof to help bring donations for the Marine Corps League’s annual Toys for Tots drive. The officers spent time on the roof vowing to not come down until the end of the day or after filling a trailer full of toys.

A total of 53 bikes were donated along with toys and money.