Griffith, 22, is a Stanly native who received her associate in criminal justice degree at Stanly Community College.

Before joining the Locust Police Department, she had served for more than a year as a deputy with the Stanly County Sheriff’s Office.

“It’s a lot of downsizing,” she said about her new position. “It was a bit of a transition, but it was a good transition.

She replaced Brittany Tucker, who is now a Locust Police detective. 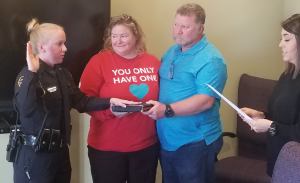 “I was very excited and pleased to be working with children,” she said, adding that they “hold a special place in my heart.”

For Griffith, working in law enforcement is a family affair — her husband Hunter is also an officer with the Locust Police while her father, Jerry Whitley, is a sergeant with the Mecklenburg County Sheriff’s Office.

Locust Police Chief Jeffrey Shew has been impressed with his new officer.

“Allison has already proven herself to be an outstanding hire for our department and I believe she will establish herself as one of the best if not the best school resource officer in the entire county,” he said. “She’s extremely intelligent, thoughtful and polite, with a tremendous positive attitude and work ethic.”

Shew said that once the department learned that becoming an SRO was Griffith’s career goal, they quickly reached out to her about taking the position.

“It just couldn’t have been a better fit for her and our department,” he said.

Her main priorities are making sure all the students and staff are safe. She makes her rounds through the school several times per day, also making sure all doors and gates are properly secured.

“I take my responsibilities very seriously,” she said.

With students back in school four days a week, Griffith says the best part of the job is simply interacting and getting to know them. She especially likes engaging with students during P.E. and recess. During her first week introducing herself to all the classrooms, she received several hugs from the kids (all while being properly masked).

“I’m a big kid myself so it’s easy,” she said about getting to know the students.

And the school has appreciated all of her work thus far.

“From helping our car rider line in the mornings, to walking our school and helping students, she has done a great job,” said Principal Devron Furr. “She has already forged relationships with students, parents and staff. Officer Griffith is always willing to step in where possible to help our staff and students.”

He added: “We are very lucky to have her with us at Locust Elementary.”