Denning House, Crook Pavilion round out Holiday Tour of Homes 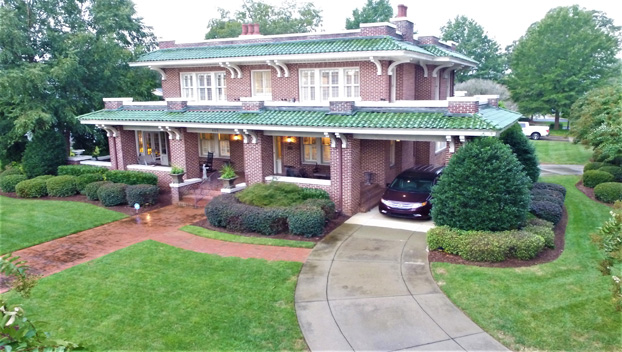 Site 7 is the home of David and Brenda Scarboro at 415 N. Second St. This brick home may be better known as the Denning House and is listed on the National Register of Historic Places.

Site 7 is the home of David and Brenda Scarboro at 415 N. Second St. and rounds out the three historic homes on the tour that are located side by side on Second Street. This brick home may be better known as the Denning House and is listed on the National Register of Historic Places.

The Denning House was designed by architect Louis H. Asbury and built by Thomas Marcellus Denning and Bettie Strickland Denning between 1924 and 1925. The home is a two-story, double pile, Spanish Colonial Revival style dwelling that features bracketed, tile pent cornices, a full-façade porch with a parapet roof, and a side, sun porch with a porte cochere.

Thomas Marcellus Denning resided here with his family through his retirement in 1960, until his death in 1962. The Denning House was then used as a group home and rental property, while it remained in family ownership, until 2006.

Some may be surprised to hear that the Denning House was not the first structure built at that location. In 1904, JW Cannon built a supervisor’s house on this corner, known as the Boger House, which was moved in 1917 for a new house to be built. The Boger House was moved again in the 2000’s to North First Street. It is unknown why it took almost six years to start the Denning’s new home.

The house was remodeled by the Dennings in 1949 and much of the original molding was removed from the front rooms to make the house more modern. These moldings were recreated and added back in the 2010 restoration by the Scarboros. During that restoration, the 1949 kitchen was replaced with a new, larger kitchen, a back porch and butler’s pantry were opened up to make a larger space, and the main floor bath was restored to its original appearance. In 2018, the Scarboros returned the side, sun porch, which had been previously removed. Other remodeling and restoration projects included adding a half bath to the main floor, an upstairs bathroom was remodeled to look like the 1920s, and two new bathrooms were added. The original tile roof was restored and the yard professionally landscaped in 2010.

Other notable architectural features include five fireplaces, and original quarter-sawn oak flooring, used throughout the house (except for the bathrooms) that was milled by the W.M. Ritter Lumber Company. Lengths of the flooring that were lifted during the current rehabilitation were found to have “W.M. RITTER LBR. CO.” inscribed on their underside.

The interior of this home is furnished with a mix of antiques and time period pieces. The Denning family donated family photos to the Scarboros, which now grace the staircase of the home. Many of the main floor chandeliers were added in the 1940s and were all restored. Many of the sconces that were removed in the 1940s have been added back. During the 2010 rehabilitation, the ghost marks for the original molded chair rail and moldings applied to the walls to simulate paneling were discovered. They had been removed by the Dennings in about 1949 when highly decorative wallpapers were added. The Scarboros have reinstalled these features, which replicate those designed in 1923 by Mr. Asbury that remain intact in the Jasper Efird House in Albemarle. Small panels of the floral wallpaper have been preserved within those moldings above the doors to the stair hall and kitchen.

The Scarboros say they love having family gatherings at the home and preparing meals in the kitchen. The sunroom was one of Brenda’s favorite rooms in the home and Christmas was also her favorite holiday. It is said that if she had her way, it would have been Christmas year round. The grandchildren love the house and enjoy having the upstairs bedrooms all to themselves. 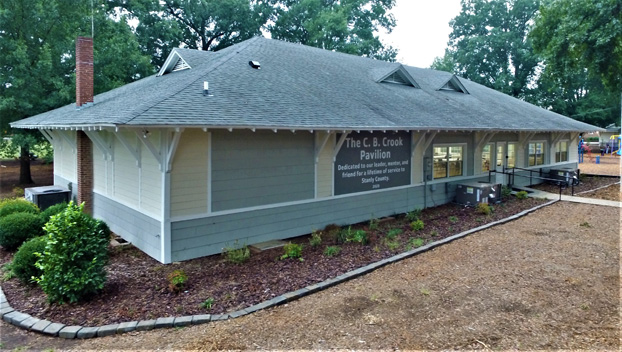 The C.B. Crook Pavilion at the YMCA Park is the last stop on the Holiday Tour of Homes.

The eighth and final site of the tour is the C.B. Crook Pavilion at 115 C.B. Crook Dr., owned by the Stanly Family YMCA. This historic building was constructed in 1918 by the Wiscasset Mill Company, a subsidiary of Cannon Industries. The pavilion was built by R.L. Holbrook as an open-air recreational building that served as a roller-skating rink for mill workers. Bands also used the facility to perform in the park on Sundays.

In 1940, the pavilion became a community center for social and recreational activities, and by 1956 a Senior Citizen Fellowship Group was formed. It was quoted as a “dream come true” for persons 60 and older.

In the 1950s, a Dedication Ceremony was held in the pavilion for the YMCA, and windows were added to the facility. By the 1980s, they began using the structure for YMCA Day Camps, church, family and civic group functions, as well as serving seniors.

In 1984, the pavilion, along with the YMCA, land and nearby ballfields were given solely to the YMCA for continued use. By 1994, it was time to expand the facility, and Stokes Construction was tasked with building a 2000-square-foot addition, for the expansion of a growing child care program.

That brings us to today, where $500,000 was raised for the purpose of renovating and modernizing the pavilion. S & D Construction, led by Sherrill Smith, was responsible for modernizing the structure, while still keeping the charm and architecture of the time period it was built. The pavilion was renamed the “C.B. Crook Pavilion,” for a notable leader and supporter of the Stanly County Family YMCA.

As you tour this facility, be sure and take note of the renovations that include new flooring and paint throughout, a full kitchen, new restrooms and technology that will accommodate any type of event.

During these times of Covid-19, the Stanly County schools have been able to make use of the new facilities for remote learning. When restrictions are lifted, the pavilion will go back to all of its previous uses, including events like family and class reunions. In addition, the YMCA is excited to expand to other special events, such as parties, wedding receptions and the like.

The C.B. Crook Pavilion has been home to thousands of kids who grew up at YMCA camps, and some of them now work there.

Tickets are $12 in advance and $15 the day of the event. Advance tickets and brochures with tour maps are available at Glory Beans Coffee House, Starnes Jewelers, Make It Personal and the ADDC Holiday Pop Up Shop, at 113 S. Second St.

Tickets and brochures will be available the day of the tour at Glory Beans Coffee House, beginning at 1 p.m.

This year, as a courtesy to homeowners, masks will be required to enter all residences. A mask will be provided for all ticket holders, to be picked up at the first site you choose to tour; or you can provide your own.