The Paynes: A family of heroes on different front lines

This past September, Sgt. Maj. Thomas “Pat” Payne, an Army Ranger assigned to the US Army Special Operations Command, was awarded the Medal of Honor for his role in a mission that freed 75 ISIS-held hostages in 2015. President Trump, who presented the award, said that Pat had joined “the immortal company of our most revered American heroes” and that he personified the motto “Rangers lead the way.” 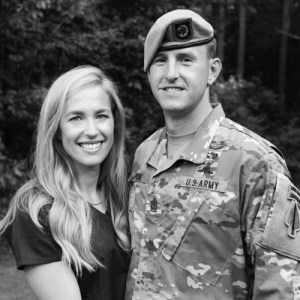 Alison, who married Pat in 2013, has been the sole force holding down the Paynes’ fort, which now includes three young children, whenever her husband has been away on deployment. “Sole” is the operative word: As is often the case with military couples, extended family isn’t close by to lend a helping hand, and in most cases, the Paynes eschew daycare and babysitting.

“Service is a way of life for our family,” Pat said. “Alison is an extraordinary woman, and we are blessed to have her in our lives. She serves our community as a nurse, and our family as an amazing mother and loving wife.”

The Paynes live near Fort Bragg, where Pat works in the Army base of the same name. Alison works as an ER nurse at a nearby hospital. They first met in 2010, and they started dating shortly thereafter. All told, Pat has been deployed 17 times during his military career, which began in 2002. Alison said that more than 10 of Pat’s deployments have caused her to be separated from him, often for months at a time, and that the separations have happened both before and after they started a family.

Pat’s participation in the 2015 mission that freed the hostages was particularly poignant. It marked the first time he had been deployed since the birth of the Paynes’ first child, who was a baby at the time of the mission. Remarkably, Alison seems to have taken this anxiety-filled situation in stride (or as much in stride as one can).

“Pat had been on several deployments since we first met,” she said. “So, I had had plenty of experience with that. Still, you never really know what’s happening with them while they’re there, but you know that at any point, they could be put in a situation that is dangerous.

“So, that’s definitely something that’s always in your mind. But, you still have to put that aside and carry on, especially if you have little ones at home. It can’t just be in the forefront of your mind all the time.”

Fortunately, while Pat was away helping free the hostages, Alison did have reason to think about matters other than her husband’s latest deployment: She was in school working towards her nursing degree. Eventually, she earned a Bachelor of Science in Nursing from Appalachian State University.

While at Pfeiffer, Alison earned a Bachelor of Science in International Business and Business Administration. She bolstered the international side of her studies by participating in a study-abroad program at the University of South Australia.

Before Alison started studying to become a nurse, she held sales/marketing positions in two different industries, beverage and pharmaceutical. She said that she became an RN because she found the work interesting, liked helping people and could have a schedule that was flexible enough to keep her at home with her children most of the time. Alison’s current employer has her working on a pro re nata, or PRN, basis; this means that officially, she works less than a part-timer would, a situation that “allows me to stay home with our children so much while still regularly practicing nursing,” she said.

While the Paynes’ deployment-caused separations have been an omnipresent factor in their relationship, so, too, is another, even stronger dynamic, namely their support for each other. This became apparent on their first date, when both Alison and Pat were living in South Carolina.

Alison, who was working as a sales representative of Columbia’s Anheuser-Busch distributorship, had met Pat on a wakeboarding outing with some mutual friends on Lake Murray, and it was there that the two decided to sign up for a team obstacle race at Fort Jackson. At the time, Pat was wearing a large knee brace and on convalescent leave, though he had already completed the toughest parts of physical therapy aimed at rehabilitating a right knee injured by shrapnel in Afghanistan.

Alison asked Pat out, with a run to be the date’s principal activity.

“I knew Pat needed some support to get back in shape, both for the obstacle race and for his demanding job,” Alison said.

“That was the one time I was able to beat Pat in a race,” Alison joked.

Like Pat, Alison remains an exercise buff – her enthusiasm for staying active owes something to her time at Pfeiffer, where she ran cross-country, making the all-conference team. She also played defense on a women’s lacrosse team that won three CVAC championships.

“I’m still really proud of that to this day,” Alison said. “I would love to give a little shout out to the lacrosse girls.”

Alison stressed that “not all the home stuff’s on me,” that when her husband is home, he’s more than willing to assume the role of sole parent. This happens whenever she works a shift as a nurse, usually for a 12-hour period over a weekend. And it happened this spring, when the COVID-19 pandemic kept Pat home, and Alison became one of several nurses who provided extra support for eight weeks in a COVID ED at a hospital on Long Island, which was then part of the Greater New York City epicenter of coronavirus cases.

The work in New York underscored the fact that public service matters as much to Alison as it does to her husband.

“I just felt called to help out in the crisis,” she said. “And, because of that PRN work status, I was able to have the flexibility to go where I felt I could be of assistance during our nation’s time of need.”