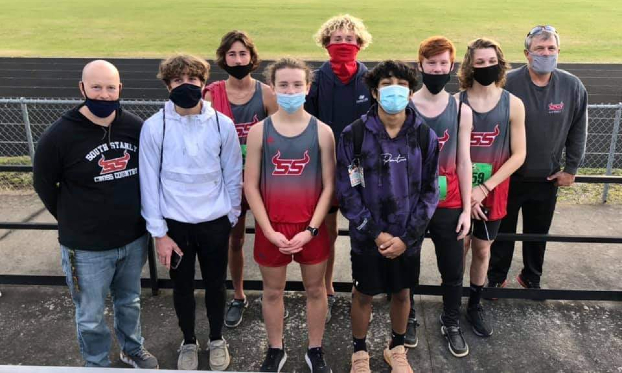 History repeated itself in 2020 for the South Stanly men’s cross-country team.

The Bulls, ranked No. 1 in the region by NC Runner, claimed the program’s second-straight conference championship by winning the 2020 Yadkin Valley Conference conference meet at North Moore Friday.

South had three runners in the top 10 and finished with 51 points, 17 less than second-place Uwharrie Charter. Gray Stone and South Davidson finished tied for third with 83 points each, followed by Chatham Central (105), North Moore (139) and North Stanly (168).

Davis Wright was the top finisher for South. The sophomore finished second overall with a 17:31. Fellow sophomore Ranfere Garcia took sixth for the Bulls finishing in 18:34 while sophomore Jayden Oliver took eighth in 18:46. Josh Huneycutt, a freshman, finished 15th for South in 19:15 and Mason Huneycutt rounded out South’s top five in 20th with a 20:20.

For North, Nicholas McClure was the team’s top finisher, placing fourth in 18:28.

Albemarle did not have enough runners to place as a team; the Bulldogs’ top finisher was Christian Poplin in 33rd with a time of 21:58.

South advances to the 1A Midwest Regionals scheduled for Jan. 16, with the 1A state championships Jan. 23 at Ivey Redmon Park in Kernersville.