AL Capehart, aka Santa AL, reflects on the jolliest of jobs

Every Christmas season over the last 28 years — except this one, in which the pandemic has kept him at the North Pole and (bah humbug) contemplating retirement — Dr. AL Capehart Jr., a 1961 Pfeiffer College graduate from Pittsboro, has worked as Santa AL all over the Research Triangle of North Carolina.

If Capehart is really ready to stop Santa-ing, he can point to a busy, grueling schedule as one of the reasons. A typical day might begin at 10 a.m. with a four-and-a-half-hour engagement at the Crabtree Mall in Raleigh. This would be followed by a five-hour evening appearance at the Walnut Creek Amphitheatre or, if other Santas could cover for him, at country clubs, private homes and parades.

“If you’ve ever wondered what Santa AL did to stay in shape, it was yoga,” said Capehart, who holds a bachelor’s degree in history from Pfeiffer College, which became Pfeiffer University in the 1990s. 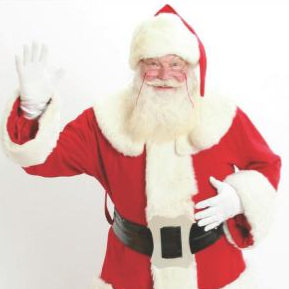 “Yes, sir, at least 30 minutes a day. In fact, one of the publicity posters that I taped to the wall where I take yoga classes shows Santa AL doing a warrior pose in the Santa toy land set of the Crabtree Mall.”

At malls, Santa AL enchanted scores of their youngest visitors, each of whom would sit on his knee for a photo and, after professing their (mostly) good behavior, reveal what’s on their gift list.

“Santa AL asked me to be a Mrs. Claus, but I’d rather be an elf,” she said. “Elf Renee came into being when children asked Santa what my name was. Santa AL said, ‘Elf Renee.’

“I began taking photos of visitors with Santa during some events in Pittsboro. I enjoyed those opportunities, but I am really needed to assist Santa AL in preparing for his gigs — making sure he has clean gloves, mending the fur and brushing the Santa suit. I prepare his peanut butter and jelly sandwiches for his snacks between same-day gigs. And it was really important to have hot healthy soup waiting when Santa AL returned home at 11 p.m.”

Capehart cultivated such a strong Santa image that he was profiled in Our State magazine (December 2017) and on a WRAL.com news segment. He got to kiss Bev Perdue, North Carolina’s former governor, in 2013, her last year in office, after she offered him her cheek during a tree-lighting ceremony.

Kids he met once at the North Carolina State Fair asked him: “Are you Santa Claus?” Capehart, though off Santa duty, replied, “Have you been good?”

Capehart’s celebrity encouraged him to branch out in several Santa-friendly ways: He’s an award-winning poet of Christmas-related fare, and he’s a published memoirist, having penned “Behind Santa’s Smile: Twenty Years as Santa AL” (2014, CreateSpace Independent Publishing), which is available on Amazon. He also created a website for Triangle Santa Buddies (TSB), of which he’s a founding member.

TSB’s main aim is “to increase the presence of the Christmas Spirit,” Capehart said. “And you do that by having as many Santas out there as possible. The Buddies’ motto is: ‘The more Santas there are, the more Christmas Spirit there is — but only one Santa in the mall at a time.’”

Capehart was born and reared in Richmond, Virginia. He decided to enroll at Pfeiffer because, as a high school student, he felt called to become a Methodist minister and saw the school “as a great opportunity to come under the influence of strong Methodists.”

He would ultimately decide that the life of a minister was not for him, although he earned a M.Div. from Duke University. He also holds a M.Ed. from UNC Chapel Hill and a Ph.D. in Psychology from NC State University.

Pfeiffer didn’t plant the idea for playing Santa in Capehart. But it could be argued that something of the spirit he developed there did: “Every time Pfeiffer opened up the door for something, I was right there in the front of the line.” This would include athletics (he wrestled, fenced, ran track and field and played on the school’s first soccer team); the arts (theater and choral singing); and all manner of community service. He also journeyed to Germany, where he and other students helped repair Methodist churches damaged in World War II.

After Pfeiffer, Capehart took advantage of a range of opportunities that came his way, from participating in efforts to fight poverty to founding and serving as the volunteer president of NC Rail-Trails.

In 1992, Capehart had his own home repair and maintenance business. His son AC graduated from college, and, as part of the graduation gift, father and son toured Europe by train. During the trip, Capehart let grow what became a very long and white beard. When he got back, his customers said he looked like Santa and should see if the mall would hire him.

“They were right about that,” Capehart said. “Before long, I was working lots of Santa jobs at malls and elsewhere. I feel like Santa Claus called me to come to do his work.”