Santiago “Santi” Moar Sánchez, a standout from Spain, is among the most successful student-athletes to have graduated from Pfeiffer University.

He earned a Bachelor of Science in Health and Physical Education, a major in the university’s Division of Education. Graduating in 2018, he played a pivotal role in Pfeiffer winning the 2015 NCAA Division II* Men’s Soccer Championship: During the second half of the sudden-death overtime in the semifinal game against the University of Charleston, West Virginia, he crossed the ball across the box to Jaime Siaj Romero, enabling the fellow Spaniard (and current pro player) to score the game-winning goal. Pfeiffer beat Cal Poly Pomona easily in the finals, going undefeated in the process. 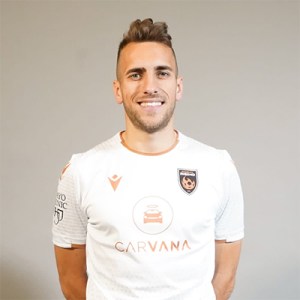 All this – and much more, including Moar’s statistics and honors – would impress scouts from professional teams; today, he plays forward on the Phoenix Rising FC of the USL Championship, which he joined in 2017, having been drafted by a team now called Philadelphia Union II.

A bachelor’s degree, a college championship, and a stint in the pros — these typify many a student-athlete’s success. In Moar’s case, though, they’re only part of a much richer story, a story in which his adopted “Pfeiffer family” played a leading role.

The Pfeiffer family stood by Moar steadfastly, helping him overcome the complications of an injury that threatened both his soccer career and his overall health. It also came up with a way for him to graduate — despite the fact that he skipped the spring semester of his senior year to turn pro and had ended up in far-away Pennsylvania.

“We were very lucky when Santi came to us,” said Bob Reasso, a 1973 Pfeiffer alumnus who coached his alma mater’s soccer team when Santi played on it. “But, Santi was very lucky when he came to Pfeiffer. Our family, the Pfeiffer family, just wrapped its arms around him and loved him and took care of him. All the accolades and everything that Santi has achieved had a great deal to do with him being at Pfeiffer.”

Moar is a native of La Coruña, a port city in the Galicia region of northwestern Spain, and before coming to Pfeiffer, he had lived there his entire life. His time at Pfeiffer had its roots in his longtime desire to reside in the United States, where he might improve his English and try his luck as a soccer player, perhaps at a university.

In spring 2014, Moar showcased his skills at a combine in Madrid for coaches of soccer teams from colleges in the United States, hoping that one of them would recruit him. One of these coaches was Reasso, who coached Pfeiffer’s men’s soccer team from May 2013 to August 2018.

Reasso is now the executive director of soccer and the head soccer coach at Combine Academy in Lincolnton. His last head-coaching job before coming to Pfeiffer was from 1981 to 2009 at Rutgers University, which inducted him into its Hall of Fame. He led Rutgers to 13 appearances in the NCAA tournament, including one in 1990, when Rutgers fell 1-0 to UCLA in the national championship game. The Rutgers-UCLA game was an epic contest that went into overtime four times before it was decided by penalty kicks.

What would it take to achieve similar success at Pfeiffer?

Reasso posed that question to his close friend, Ian Hennessy, who was one of his assistants at Rutgers. Hennessy, who is now the head coach at the University of Delaware, recommended including players from Spain in the mix at Pfeiffer, having had much success with the ones he had recruited.

During the early years of his Pfeiffer tenure, Reasso traveled twice to the Madrid combine, snatching up five players from Spain, including Moar, and two from Portugal.

During the combine in which Moar appeared in several tryout games, Reasso quickly came to view him as the kind of prospect he had to recruit.

“Santi is so elusive,” he said. “If you can eliminate people on the dribble, you are a very valuable commodity for any team. Santi was good at not only eliminating one person; he could eliminate multiple players, and he’s proven that and continues to prove that as a professional right now.”

Shortly after the combine ended, Reasso approached Moar with a scholarship offer. He didn’t have much to show him, other than a brochure of a picturesque campus in rural North Carolina.

“I didn’t know where North Carolina was,” Moar said. “I couldn’t locate it on the map.”

Still, something about Reasso’s exchange with Moar must have clicked.

“I really liked Bob and the way he talked up his program,” Moar said. “When I saw the pictures of Pfeiffer in that brochure, it seemed like such a perfect place for me to focus on sports and my education.”

Moar, who is now 27, accepted the scholarship offer. He would enroll at Pfeiffer in fall 2014 as a 21-year-old sophomore, having been able to transfer several credits from a college he attended in Spain. Everything looked auspicious — until, that is, Moar tore the meniscus in his right knee. This happened in the last club game he would play in Spain, about a month before he was scheduled to travel to Pfeiffer’s campus in Misenheimer. He underwent surgery in Spain with the support of Reasso, who felt his recruit would need minimal rehab to get back in playing shape.

Such a scenario was not meant to be — which became clear as soon as Moar arrived in Misenheimer and showed Pfeiffer’s coaches and medical staff his knee. A serious, balloon-sized infection had emerged, likely exacerbated by the flight to the United States. Further surgery would be needed to better repair the meniscus and to begin staunching the infection.

At this point, Reasso had a few choices. He could revoke Santi’s scholarship and send him home, having decided that the considerable investment he had made in him no longer had any value. Or, he could send Santi home and tell him not to return until he had fully nursed himself to health in Spain.

Such scenarios might fly at other schools, particularly those in Division I. But they wouldn’t be in keeping with the Pfeiffer family ethos. Pfeiffer’s soccer team redshirted Moar during the 2014 season with the idea that he would use the time away from the pitch to undergo a second surgery, rid himself of the infection and undergo rehab to get back into playing form.

What happened after the second surgery was performed turned out to be quite an undertaking, both for Moar and the Pfeiffer staffers who treated him: For six weeks, Moar spent two hours each morning and another two hours each evening hooked up to an IV, receiving antibiotics that would prevent any residue from the initial infection from spreading to the rest of his body. This meant that three athletic trainers, all of whom now work at other schools, had to reserve time in their schedules to administer the IV treatments: Dr. Allen G. Snook Jr., Brandon Johnson and Jasmine Honey.

“I felt the love from everybody working in the sports medicine department,” Moar said. “I felt so much care. That made me work a little bit harder to get healthy and play for the team.”

The rehab would go well. By November 2014, Moar was jogging and passing the ball around. He played in games during the spring of the following year. Along the way, he was feeling the love of the non-athletic part of Pfeiffer’s family, which, remarkably, showered him with cookies, lasagna, his favorite dish, and small gifts during the first birthday (Sept. 5) he celebrated as a Falcon.

“That made my day,” Moar said of the celebration.

Moar would not only distinguish himself on the pitch but also in such other extracurricular activities as peer leadership and video projection, which he did for the university’s Sports Information arm. In January 2017, he had come to a crossroads. Just as he was about to begin the final leg of his studies by doing an internship in an educational setting, he learned that he could turn pro instead.

Moar talked with coaches, professors and advisors to determine his best course of action. Some urged him not to leave early, arguing that if he did, he would decrease his chances of ever completing the last semester — and make what had come before it seem like a total waste. Others encouraged Moar to go for it, telling him that an opportunity to play pro ball rarely presents itself.

In the end, Moar turned pro. However, in time, he worked with Dr. Christopher Boe, the dean of Pfeiffer’s Division of Education, to come up with a middle-ground solution that would enable him to complete work toward his degree: Between January and May of 2018, he did an internship at the YSC Academy, which integrates a college-preparatory education into the Philadelphia Union’s youth-soccer development programs. As part of the internship’s research component, Moar examined how coaches of young soccer players can benefit from understanding the different stages of their learning and brain development.

“It was not a stretch to go a little out of our way to help Santi make his other dream (of earning a degree) a reality,” said Boe, who helped arrange the internship. “I think it was the willingness to find a solution that really made the difference for Santi. We were willing, so he was willing.”

Moar completed his student-athlete experience as only a student-athlete can. On a Saturday in May 2018, he dropped by his alma mater to receive his diploma at a morning commencement ceremony on campus — then continued traveling south to Charleston, South Carolina, where, later on that day, he played for FC Bethlehem Steel (now Philadelphia Union II) against Charleston Battery. All this was documented in an article that ran in philadelphiaunion.com.

“Go for it and finish (your degree) because after soccer you need to have something,” Moar told the website. “Sometimes we think that this is going to be our entire life but sadly the soccer life isn’t that long. We need to have plans and having an education is part of that.”

What’s in Moar’s future? He clearly loves playing soccer and feels lucky that he can do it for a living, if only for a limited period of time. So, he intends “to take advantage of every moment I get.”

As for what happens after he stops playing, Moar sounds like someone who, having benefited greatly from his experience at Pfeiffer, intends to pay it forward. He’s considering obtaining his teaching licensure, so that he can begin his teaching career, either in America or Spain. This would please Boe, who, after seeing Moar student-teach in schools near Pfeiffer, said he “worked exceptionally well with students in the schools.”

Moar will almost certainly stay involved in soccer, either as a coach or as a team manager.

“After spending basically my whole life around the game, including some great years at Pfeiffer, it will be difficult to see myself without it,” he said.

*Editor’s Note: Pfeiffer became a Division III school in September 2020 and, as such, no longer offers athletic financial aid to student-athletes.