PEEKING INTO THE PAST – The Snowstorm of 1927

According to the March 4, 1927 edition of the Stanly News-Herald, on the evening of Tuesday, March 1, Stanly County was hit by the largest snowstorm seen for several decades.

Reports said there was 15 to 20 inches of snow. Wind gusts had caused some of the snow to drift into piles six to eight feet deep.

Most businesses and schools closed, but some of the textile mills continued to operate. Members of the communities worked together to clear the streets.

Some streets in downtown Albemarle were cleared by use of the fire hydrants to wash away some of the snow. Most roads were passable within a few days.

Both of today’s pictures, from the History Center collection, are possibly from this massive snowstorm. 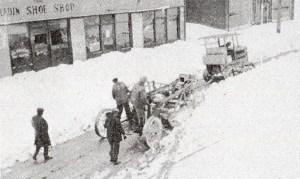 The first photo shows Pine Street in Badin and the second photo is South Second Street looking north from the Lutheran Church towards Main Street in Albemarle. 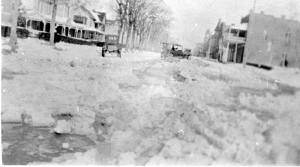