A man has been arrested following a fire at Walmart Friday night. 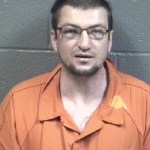 Upon investigation of the cause of the fire, officers located a suspicious male on video leaving the area where the fire began. Patrol officers were able to locate the suspect hiding behind the dumpster at Dollar Tree.

After a short altercation, the suspect was taken into custody.

The suspect, Alexander H. Lentz, 33, was arrested for first degree arson, burning of
personal property, intoxicated and disruptive, assault on a government official and resisting a public officer.