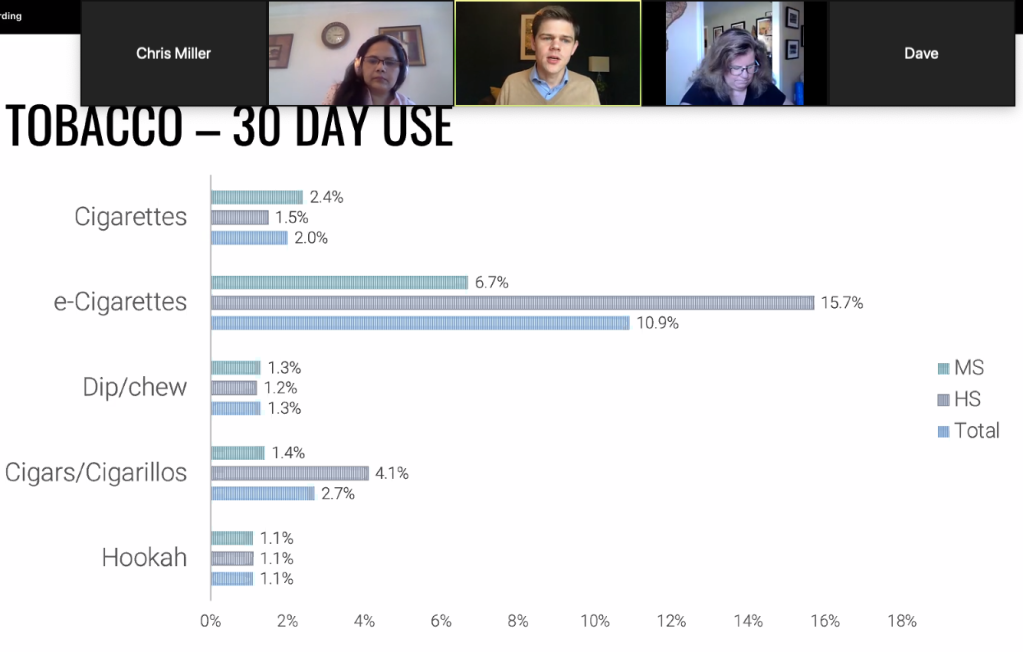 The results of a youth drug survey administered by the Center For Prevention Services in March revealed that e-cigarettes were the most common substance used by young people in Stanly County.

More Stanly County youth are using electronic cigarettes than any other substance, including alcohol, according to a new report.

The Youth Drug Survey of middle and high school students in the county, conducted by the Charlotte-based Center for Prevention Services in March, found that while roughly 7 percent of middle school respondents had consumed e-cigarettes over a 30-day period, the number more than doubled to 16 percent for high school respondents.

“This is actually a big deal because typically when you run these surveys alcohol is the primary substance used by youth,” said Andrew Reynolds, a consultant with Common Good Data who co-authored the youth survey.

E-cigarettes have become increasingly popular with teenagers and are now the most commonly used form of tobacco for teens in the country. According to the Centers for Disease Control and Prevention’s 2020 National Youth Tobacco Survey, roughly 20 percent of high school students reported currently using e-cigarettes.

In North Carolina, it is against the law for people under the age of 18 to buy tobacco products, including e-cigarettes.

Researchers collected survey responses from more than 10,000 sixth, eighth, 10th and 12th graders from 11 schools in the county. The survey was anonymous and students had the choice to not participate. The results were released as part of a Zoom presentation with local school and health officials.

“We hope that the results in this report contribute to the work of professionals across disciplines and fields to engage in reducing youth substance use behaviors across the county,” the summary report stated.

Reynolds mentioned that access also plays an important roles, presenting a slide regarding the percentages of students who labeled a certain drug as fairly easy or very easy to get. E-cigarettes topped the list for high schoolers at 43 percent, with alcohol second at 39 and marijuana at 37 percent. Alcohol was the most accessible for middle schoolers at 18 percent, with e-cigarettes at 16 percent.

Specifically for high school youth in Stanly, the rates of cigarette use, alcohol use, pain prescriptions without a prescription, marijuana and e-cigarette use were lower in comparison to Mecklenburg County and state averages.

“What I’m happy to see is that the numbers are low in Stanly County and I think they’re going to continue to drop in other places where we’re having strong prevention efforts,” he said. “Prevention is effective and it works and it’s one of the best ways that we can address substance use not only now…but as youth get older.”

Of the 1,226 students from Stanly schools surveyed, 71 percent were white, 18 percent Black, 11 percent latino and five percent Asian. Eighth graders made up the largest group of respondents at 37.2 percent, with sixth grade at 33.5 percent and 25.1 percent of 10th graders. Only 4.3 percent of seniors participated.

Since the sample size with seniors is so low, “it is likely that seniors are highly underrepresented in this report and consequently, substance use of seniors is under-reported,” the report says. Results then for high school youths should be “interpreted with caution.”

The Youth Drug Survey was designed by CPS more than 30 years ago for students in Mecklenburg County and has been in continuous use with Charlotte Mecklenburg Schools ever since. This was the first time the survey was administered to students in Stanly County. The next round of surveys will be conducted in 2022.

The survey is part of a five-year $1.25 million Partnership for Success Grant that CPS was awarded and that will serve the needs of those in Stanly. The grant, funded by the Substance Abuse and Mental Health Services Administration and began last fall, will run through Sept. 20, 2024.

For more information about the survey results, people can go to https://preventionservices.org/wp-content/uploads/2020/12/Stanly-Youth-Drug-Survey-2020-Report-Final.pdf.