After recently responding to a report of a stolen scooter from a Locust teenager, Locust Police Cpl. Dwayne Dietz went above and beyond the call of duty to make sure the young man had a special early Christmas present.

Once Dietz learned that the victim, 17-year-old Jihad Hooker, had saved all his money to purchase the scooter, which was used to take him to and from work so he would not have to burden his parents, the officer wanted to find a way to help.

“I was talking with him and he was just a polite and courteous young man,” said Dietz, who’s been with the LPD for eight years. “Just the way he treated me and talked to me, I knew he was a good kid and excited about the moped.”

So touched by Hooker’s thoughtfulness and his work ethic, Dietz organized a community fundraising effort to purchase a new scooter for the teen. Several people helped with the effort including Neil Smith of Barbee’s Garage, other Locust police officers, dispatchers with Stanly County Communications and many anonymous donors from the community. Just three days after he started the effort, Dietz was able to purchase a scooter fully gassed from Albemarle Outdoor Supply, along with a year’s coverage of insurance for the scooter and many items to protect the scooter.

Dietz personally presented the scooter to Hooker and his family at City Hall last Wednesday. 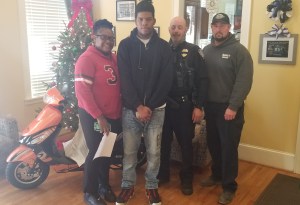 “It’s a good feeling when we can help out good people in the community,” Dietz said. “I knew the community would come together because we have a great community and a great county.”