Officers with the Albemarle Police Department were dispatched to an alarm call at Sun Plaza Carwash and Lube at 737 N.C. Highway 24-27 Bypass East shortly before 3:30 a.m. Thursday. 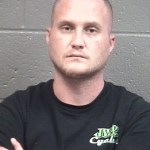 Upon arrival, officers found a broken window on the backside of the business. Officers searched and found a suspect had already left the business. Upon investigation, officers determined that a male who was identified as Mark Arndt, 35, of Badin, allegedly broke into the business and took the safe.

Upon further investigation, officers were able to locate Arndt at Heathfield Apartments, 223 S. Morrow Ave., and placed him under arrest. Arndt was transported to the Stanly County Jail and charged with two counts of safecracking, felony breaking and entering, larceny after breaking and entering and obtaining property by false pretense.

Arndt received a $25,000 secured bond for his release. His first scheduled court appearance is Jan. 25 at 9 a.m.