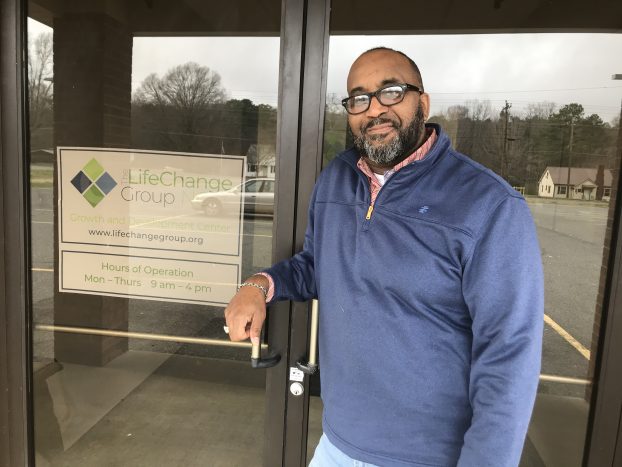 Brian Johnson founded The Life Change Group NC in 2018. He works with people to improve their lives.

Brian Johnson lives in Albemarle and is currently a life skills instructor/counselor at Life Change Group NC, the nonprofit health and wellness organization he created in 2018.

He is aware that the term life skills instructor is often thought of as a catch-all term that can mean different things to different people. In the simplest terms, Johnson works with people, without judgement, to help them navigate their way through whatever obstacles may be in their lives.

“Whatever their situation is, I come alongside of them and partner with them for that journey,” he said.

And Johnson knows all too well that no person can get through life, with all its many challenges, alone.

“A sense of community”

Originally from Massachusetts, Johnson spent the bulk of his life in upstate New York in Albany. He worked as a full-time pastor and was active with the city’s head start program, where he worked as a family services advocate.

He came to Albemarle in 2013 with his father due to health problems of family members that lived in the city. What was supposed be a short trip ended with Johnson deciding to make Albemarle his new home. Being a person of faith, Johnson was attracted to the area, with its many churches and places of worship.

“The ties of faith are strong in Stanly County and that made it very appetizing and more convenient,” he said.

Though the choice to stay in Albemarle was an easy one for Johnson, his initial time in the city was difficult. He was homeless for the first several months and he dealt with family difficulties around domestic violence. Even with the challenges, Johnson was still able to find work as a teacher assistant at Central Elementary School and later as a pastor at Perfecting Life Global Ministries, a non-denominational, multicultural church.

His personal difficulties, though, helped lead him to friendships with several prominent people in the community, including Jana Sanderson, who works at the Community Inn in Albemarle, Central Elementary Principal Melissa Smith, E.E. Waddell Center supervisor Billy McRae and Dr. Hal Bilbo of the Stanly-Montgomery Baptist Association. These people “saw something in me,” he said, and they encouraged Johnson to discover his passion as a life skills instructor and counselor.

They also motivated him to find a way out of homelessness and “not become a victim of that situation,” he said. “My situation did not define my reality.”

“One thing that Stanly County has taught me is…it’s not what you know, but it’s who you know around here,” Johnson said.

When Smith first met him at the school, “he had this drive, this ambition to make things better in Albemarle,” she said. He used his position as a teacher assistant as a vehicle to help students in whatever ways he could.

“His goal wasn’t really to be a teacher’s assistant,” Smith said. “It really was to affect the lives of young people.”

With the support of people in the community, Johnson adjusted to his new city. He was able to find and rent a home, thanks to help from the Gaston Community Action, Inc., a nonprofit group that provides anti-poverty programs in Cleveland, Gaston, Lincoln and Stanly counties, according to its website.

As he got settled and stabilized in Albemarle, he began a long-distance relationship with a woman named Karissa who lived in Connecticut and was already a youth pastor. After a year and a half of dating, they married in August 2016 and Karissa moved to Albemarle. She works at Monarch in Albemarle and is also a pastor with Johnson at Perfecting Life Global Ministries. 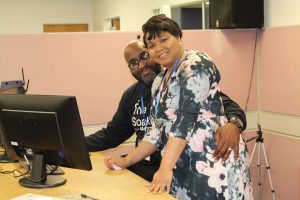 Brian and Karissa Johnson are pastors at Perfecting Life Global Ministries in Albemarle. In 2018, Johnson created Life Change Group NC to help improve the lives of people in the area.

Johnson promised himself early on that once he was no longer homeless, he would give back to the community that helped get him back on his feet. Once his life was stable and he had his home, he kept his promise to himself by creating the Life Change Group NC.

Johnson had already had a history of working with people to better their lives before he came to Albemarle and opened Life Change Group. Including his time in New York, he had more than 30 years of experience helping people with a variety of issues from dealing with substance abuse and helping out the homeless population to helping people craft resumes.

Johnson insists he’s always been prepared for helping others by creating an organization like the Life Change Group, because “it’s a part of my DNA.”

He officially opened the Life Change Group NC at the beginning of 2018 and incorporated in March. The building is at 2215 U.S. Highway 52 North. The organization, which is faith and evidence-based, “is centered around the crucial inclusion of the whole person development in relationship to spirit, mind and body,” according to information on its brochure.

Life Change offers counseling for individuals, couples, marriages, families, teens and children as well as leadership and self-development classes, according to information from the organization’s brochure. As a trained Prepare/Enrich facilitator, Johnson has already already provided pre-marriage counseling to several couples in the county.

Johnson, who is a board certified Christian counselor and life coach, works with his clients to offer clarity about themselves and what they want; he helps them make strategic plans to achieve their goals; he shares valuable information and guidance about key resources available to them; and helps them deal with challenging thoughts and emotions they might be facing.

“We’re simply here to be a part of a person’s journey to change,” Johnson said.

Johnson said his services are open to anyone from any religious background, as long as they know the support they would be receiving would be based on Christian principles. The curriculum for much of the programs offered comes from the American Association of Christian Counselors. Due to the coronavirus pandemic, much of his counseling now is conducted virtually.

The Life Change currently consists of only two staff members — Johnson, who is the executive director, along with Walter Parker, who is the growth and development specialist. The organization wants to grow and is looking to hire certified counselors who have experience helping people with substance abuse.

The organization has also been active with several groups in the county. Johnson has provided counseling and life skills training to male inmates in the Stanly County Detention Center as part of Safer Communities Ministry, and he has helped prepare meals each month for people at the Community Inn. He has also helped prepare book bags for the back-to-school event each year at the E.E. Waddell Community Center and has worked as a mentor with at-risk young people in the community as part of the Stanly County DASH (Developing Adolescents Strengthening Homes) program.

“Every time there’s something going on in the community…he’s a part of it in whatever capacity he can,” Smith said.

Life Change has also placed three people with substance use disorders at treatment centers across the state: the Oxford House in Salisbury, Ground 40 in Monroe and TROSA (Triangle Residential Options for Substance Abusers) in Durham. Johnson is also working to try and set up a partnership with The Bridge to Recovery, which has two transitional houses for people recovering from addiction in the county, and other relevant agencies or groups that would want to work with Johnson.

Johnson has created a Celebrate Recovery program for people suffering from substance abuse and a batterer intervention program — the only one in the county — called the Domestic Violence Intervention Program, which provides men with resources to stop abusive behavior.

He has talked with a local probation officer about the possibility of presenting the domestic violence program to Stanly County District Attorney Lynn Clodfelter as an option for men imprisoned for domestic abuse. Johnson said his program depends upon referrals from various groups within the court system, including the police department, probation office and social services.

Johnson has also become more involved in the community when it comes to racial justice, in light of the deaths of George Floyd, Breonna Taylor and other Black people at the hands of law enforcement. He helped facilitate an open forum last June, titled Bridge the Gap, where law enforcement officers, elected officials and local clergy spoke about their views regarding race relations. He has also developed a diversity training for people in the community that tackle questions such as “What does it mean to be different?” and “What does it mean to be a person of color?”

“We as human beings are at a point of no return,” he said about the protests last year regarding systemic racism and police brutality. “We have to fix what is broken.”

With all the work Johnson has done to improve the lives of people in the county, he embraces the mindset that he meets them wherever they are in life without judgement with the ultimate goal of helping them achieve their better self.

The “without judgement” part is key because, as a counselor/life coach, Johnson has seen people at low points in their lives. But that’s where faith comes into play and Johnson has plenty of it. He is inspired by a historical figure who could be considered a quasi-counselor in his day: “Jesus went out of his way to make sure that he was non-judgmental” in his interactions with people, Johnson said.

“You have to have a heart and a passion for people and I do,” he said about the work he’s doing.