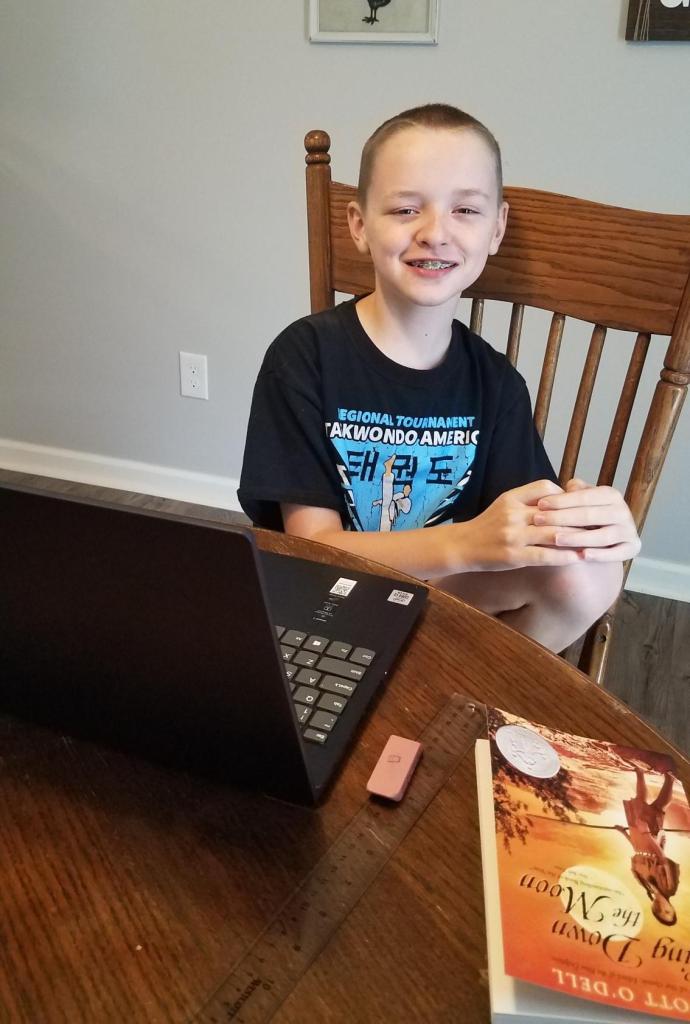 Locust Elementary School fifth grader CJ Reichert is one of many students in the county that has worked remotely this year. Photo courtesy of Miranda Reichert.

Since school started in August, 11-year-old CJ Reichert, a fifth grader at Locust Elementary, has been in an odd position. He interacts with his classmates and teachers each day, but as a fully remote student, it’s done virtually as opposed to in a traditional classroom. And while his family regularly receives updates from Locust, they also hear from West Stanly Middle School, where the fifth grade classes are being housed.

His mom Miranda feels he’s in a sort of weird limbo: “He kind of doesn’t really know where he belongs as far as schools,” she said, adding that it can be easy for CJ and other remote students to sometimes fall through the cracks.

“They kind of feel left out a little bit because they’re not in there with the action (of in-person learning),” she says.

As a remote learner, CJ said at times it’s been overwhelming — especially being away from his classmates and teachers.

“It can make it hard to get everything done,” he said, acknowledging that remote learning can be “very stressful at times.”

CJ is one of more than 1,000 elementary students currently working from home, including 84 from Locust. Many of these families made the decision that the safety and well-being of their kids outweighed any benefits that might be gained from in-person learning.

“We wanted to be sure that we were being completely safe,” Miranda said about her decision to have CJ learn from home. His dad has an autoimmune disease and so having him at home, under his mom’s watchful eye, is one less thing the family has to worry about.

Miranda regularly receives calls from both Locust and West Stanly about new positive cases and kids having to quarantine and she doesn’t want to subject her child to the jarring back-and-forth routine of shuffling between school and home.

“I just don’t want to put my kid through getting him back to school and back in that routine and then all of a sudden it changes and he’s back remote for two weeks,” she said.

She worries that if he was in school, he would likely be uncomfortable and unable to consistently focus on his work due to the ever-present possibility that a classmate or teacher would test positive.

With remote learning, Miranda can control her son’s environment. She can provide him with more direct help and attention than his teachers.

“I can see when he needs to take breaks and I just feel like with everything going on in the world, if I can offer him a little bit of extra grace at home to be able to relax or have a snack or take a walk,” that’s a good thing, she said.

Though he occasionally gets distracted, CJ is good about staying focused and completing his work.

“When he gets up in the morning, I don’t even have to tell him and he just goes to his computer and he gets everything set up,” Miranda said. “He’s pretty self-sufficient.”

CJ’s interactions with his teachers and classmates are done through the video-communication service Google Meet. Much of his time consists of watching Youtube videos and completing worksheets with limited time for his teachers to actually go over new concepts.

“He gets very little instruction,” Miranda said, estimating he receives around an hour of it each day. CJ also gets little one-on-one time with his teachers, though if he requests it, they will work with him, his mom said. He can also email his teachers if he has questions, but CJ says it can take some time for them to respond.

But she understands and empathizes with his teachers, who have their hands full this year teaching both in-person students and those, like CJ, who are working remotely.

“The teachers have a huge amount of kids so I know it’s hard for them to schedule as much face-to-face time on their Google Meets as they’d like,” she said.

And the extension of grace and compassion cuts both ways: Many teachers allow students to turn in assignments a few days late or retake a test if they initially did poorly.

“It’s nice to see them extending as much grace to the kids as they’re wanting us to extend to them,” Miranda said.

A common issue for remote students like CJ working from home has been internet problems, especially with so many people logged on throughout the day. Problems can range from slow internet connections, which can usually be resolved in a short time, to not being able to access needed online material to complete assignments.

But the Reicherts’ take the technological problems with a grain of salt.

“They’re hiccups along the way, but all you can do is laugh and just get through the day,” Miranda said.

Miranda initially was set to have CJ return to school this month, but as cases have recently increased in the county, she decided it’s best for him to continue working from home. Of the 84 Locust students working remotely last semester, only 20 plan on returning to in-person learning next semester, according to the results of a survey sent out to remote families in November. A total of around 800 students are set to return to in-person learning.

Even though he’s physically separated from his classmates, CJ spends time each day playing with other kids in the neighborhood. The socialization is especially important for students who are spending the bulk of their time away from their peers.

“I’m just glad that he has other kids that he’s able to go outside and play with,” Miranda said.

With this being such an unusual school year, with many students dealing with a variety of stressors, Miranda encourages CJ, who’s always been an A/B honor roll student, to do the best he can when completing his assignments, regardless of the grades he will receive.

“I try to not put so much pressure on him,” she said. “What I told him this year is that as long as I can see you putting forth as much effort as you can, if you don’t make a perfect grade, it’s okay.

“They have so much else to worry about right now, I don’t want to be the one to add extra stress to him,” she added. “I’d rather be the one that he can come to to release that stress and be somebody to listen to him.”

While remote learning has its many challenges, there are some perks: CJ enjoys his snacks and taking as many breaks as needed throughout the day.

“It’s just been weird, but you just have to kind of rock on with it,” Miranda said.