In late 2006, the life of Diamond Staton-Williams had become so full that she now describes it as “wild.” 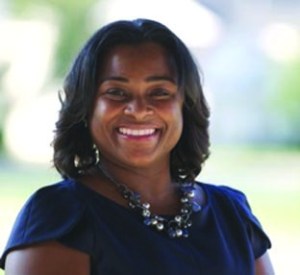 In addition to parenting two young daughters — Caela, now 23, and Colby, 19 — she worked as a staff nurse in a Charlotte-area cardiac unit for Carolinas HealthCare System, now Atrium Health. She wanted to rise through the corporate ranks and concluded that earning a Master of Health Administration from Pfeiffer University would be the best way to do that. She enrolled in Pfeiffer’s Charlotte-based MHA program in January 2007 — just a few months after giving birth to a son, Chico. (Remarkably, he was with her when Staton-Williams took Pfeiffer’s MHA entrance test and “slept the whole way through it” in a baby carrier.)

After graduation from Pfeiffer in 2010, Staton-Williams was promoted several times at Atrium Health, serving as a nurse manager from 2010 to 2011 and then assuming leadership roles in clinical care for six years. Beginning in 2016, she became the director of Atrium’s Ambulatory Care Management department.

Her role in ambulatory care has her managing a staff of 28 people who coordinate care for patients after they leave the hospital. She builds upon what she learned during her master’s studies: “I’m able to look administratively at budgets and building different teams,” she said. “My degree’s concentration is in organizational leadership — which helps me build teams and move organizations along as far as change management goes.”

Staton-Williams praised Pfeiffer’s MHA program for employing professors with lots of experience in healthcare leadership. She said that she’s responding to changes in healthcare that they anticipated and helped prepare her for, such as the Affordable Care Act and Medicaid expansion.

Asked whether she’d encourage working mothers in similar circumstances to enter an MHA program, Staton-Williams said, “I’d encourage anyone to pursue their passion. But, you have to have good support, as I did, from your family, your university and your employer.”

Staton-Williams felt supported by Pfeiffer during her master’s studies. In 2007, the MHA program was designed in such a way that she attended in-person classes two days a week and completed the rest of her coursework in an online format. This hybrid approach made it easier for her to integrate her MHA course work into an already busy schedule of family commitments and nursing shifts.

“I’m very grateful and thankful that the school thought outside the box when it came to helping adults obtain further education,” she said. “Many schools weren’t doing that back then. You either had to go in person, or you were on your own.”

At Pfeiffer, Staton-Williams studied challenging subjects. One of them was business finance.

If, as was sometimes the case, Staton-Williams had difficulty mastering the material, she could always call or email questions to a professor – and expect a prompt reply.

These days, Staton-Williams still leads a full life. She’s a member of Pfeiffer’s Alumni Board, a position that, among other things, enables her to advocate for graduates of Pfeiffer’s master’s programs in Charlotte and to learn more about Pfeiffer’s Misenheimer campus, which, of course, she didn’t know as a student.

When Staton-Williams isn’t serving on the Alumni Board (or volunteering in numerous other capacities), she’s quite active in local politics. A self-described “nosy” resident of Harrisburg, she began closely following developments of its Town Council several years ago. At first, she attended meetings or read meeting minutes “just to be aware.”

In 2017, a “shift” happened in her thinking: Instead of just keeping up with government, she thought, why not have a say in it as well? She ran for a seat on Harrisburg’s Town Council. She won, becoming the first African-American woman to serve on the council. She is running again this year and, if re-elected, would begin a second term in November.

Harrisburg, like many suburbs of Charlotte, has seen explosive growth in its population and commercial enterprises. Traffic is often heavy, making it difficult for motorists to get around. So, Staton-Williams is pushing for such improvements in infrastructure as wider roads and improved bridges. She’s advocating for “smart growth” (i.e., the kind that doesn’t diminish quality of life). She’s also looking for ways to get more young people engaged in the political process.

Staton-Williams’ involvement in health administration, politics and volunteering has raised her profile to the point where the press has begun paying attention. This past December, in an article about African-Americans in North Carolina being “on the fence” about whether they’ll vaccinate themselves against the Coronavirus, The Charlotte Observer quoted her as saying, “It’s not any fault of our own. This country needs to rebuild its trust with the African-American community.”

In an interview for this article, Staton-Williams also said that African-Americans need to find ways to move past their skepticism. One way would be to forgive the acknowledged wrongs of the past.

“We can’t be on the sidelines when people say, ‘We need someone for this advisory board in the community,’ ” she said. “We can’t be too busy to sit on that board or to run for office. Our perspective and our representation matter.”