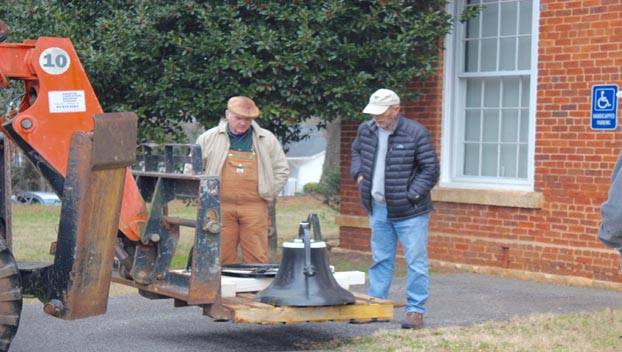 Franklin Drake and Richard Wines review the bell before it is raised.

After an absence of more than 60 years, a bell once again hangs in the bell tower of the former Mount Pleasant Collegiate Institute.

Mount Pleasant became a college town in 1852 with the founding of North Carolina College, an institution of higher learning organized by the North Carolina Synod of the Lutheran Church. In 1855, a committee was charged with finding a suitable bell to hang in the new school’s bell tower.

A bronze, 22-inch model was located in Philadelphia; it came to Mount Pleasant and was installed in the bell tower where it hung until the school closed in 1933. That bell likely woke students in the morning, told them when to go to class and when it was time for lights out.

The school bell rang a different note than the church bell at nearby St. James Reformed Church, and probably sounded different than other bells in town, speculates Franklin Drake, ECHS board member and the person responsible for seeing a bell returned to the school tower.

The mills — Kindley and Tuscarora — rang bells, as did the local churches. Drake recalls visiting his grandparents in Mount Pleasant as a boy and hearing the weekly bell test at the Mount Pleasant Fire Department on Sundays at noon.

After Mount Pleasant Collegiate Institute (the successor to North Carolina College) closed in 1933, the bell hung silently in the abandoned college building. But in the 1950s, Rev. Walter Yount of Calvary Lutheran Church in Concord, remembered the old college bell. His church was constructing a new building and the bell they had at the time was too big.

Yount knew the college bell particularly well. As a cadet at MPCI he climbed into the bell tower one night and wrapped a pair of trousers around the bell’s clapper so as to silence the dreaded wake-up ringing early in the morning.

Yount proposed a bell exchange with the owner of the college building, and the MPCI bell found a new home in Concord, where it rings to this day.

“Purely out of nostalgia” Franklin Drake began a quest several years ago to return a bell to the belfry at the former MPCI, now the home of the Eastern Cabarrus Historical Society Museum.

In 2018 he located a suitable 24-inch bell at a “junktique” store in Farmville and began restoration work on his find: the frame had to be repaired, and the bell itself was sandblasted, primed and painted black.

The greatest challenge for hanging a bell at ECHS, Drake explained, is that the hole in the ceiling leading to the bell tower, which was built before the original 22-inch bell was purchased, is only 20.5 inches across. Evidence exists that someone chopped out a beam with a hatchet to get that first bell into the belfry. 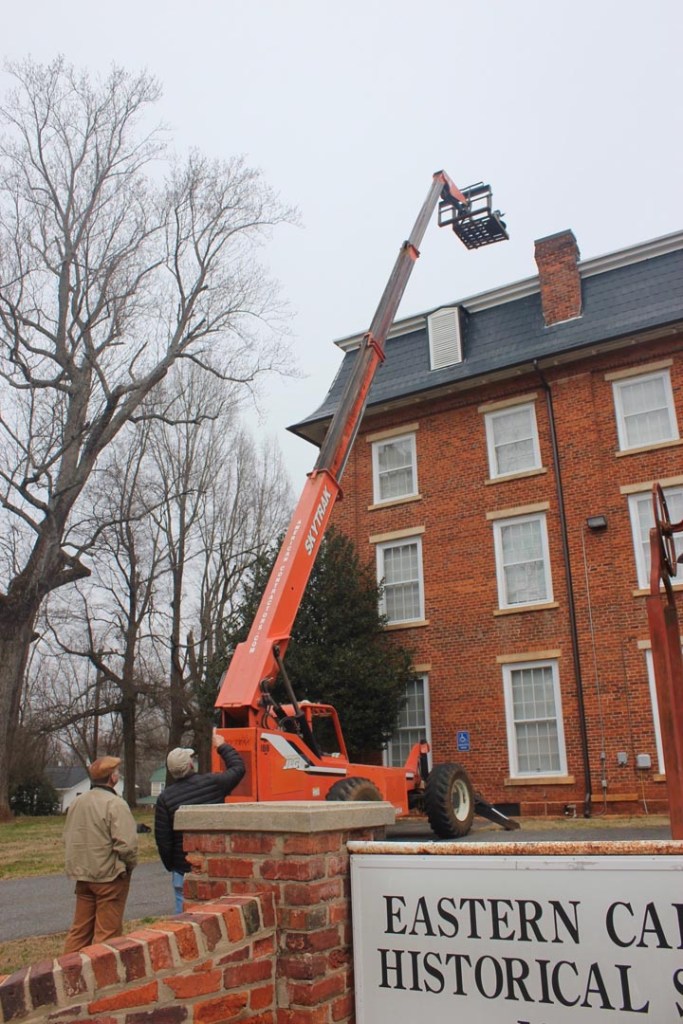 Franklin Drake and Richard Wines look on as the bell is raised at Eastern Cabarrus Historical Society in Mt. Pleasant.

In order to avoid further chopping, the new 24-inch bell was installed from the outside with the help of Helms Masonry, a local company experienced in working with historic buildings.

Now that a bell once again hangs in the belfry, Richard Wines, the museum’s Buildings and Grounds chairman, says that the next challenge is to figure out how to ring it.

Drake explains that there is no evidence of where the rope came down into the building, but both men speculate that a series of ropes and pulleys through the stairwell allowed the bell to be rung from the ground floor. They hope to recreate such a system so that visitors to the museum can hear the bell for themselves.