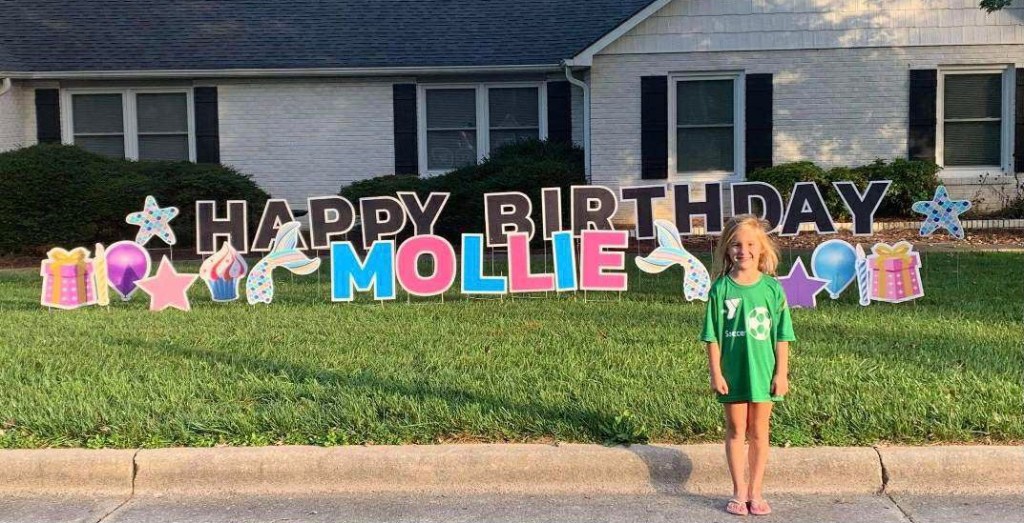 With many businesses struggling to survive in the last year during the coronavirus pandemic, two Oakboro residents took a chance and decided to open their own start-up with a simple mission: to spread as much joy to as many people as possible.

“Whatever you can put on a card, we can put it in your yard,” Jackson said.

For a 24-hour period, people can rent out a variety of yard greetings as an easy, fun and safe way to celebrate loved ones. The most requested signage is for birthdays.

“We are pretty much all about bringing happiness to everybody in the community,” said Mullen.

The idea started several months ago out of frustration. Wanting to celebrate her young daughter’s birthday with a “Happy Birthday” yard sign, Jackson called local sign and graphic shops, but they didn’t have what she wanted. She ultimately had to travel to Charlotte to purchase a yard sign.

After talking with Mullen, the two decided to open their own yard sign rental service for Stanly County residents in June and spent the next few months acquiring the necessary inventory before opening in September. Some of the items they have include the full alphabet in five colors, multiple “Happy Birthday” and “Just Married” signs, and signs announcing a baby’s gender. 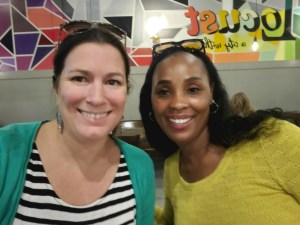 With their yard greeting signs made from durable corrugated plastic with waterproof UV printing, they can easily endure inclement weather.

Since opening the business in the fall, Mullen estimates they’ve posted signs on at least 50 properties in the county. Lawn Letter Ladies recently placed “#TheDale Loves our Teachers” in front of Aquadale Elementary School, and “Welcome Home Ellen” in the yard of a woman after she was released from the hospital.

The two women have even formed bonds with some of their clients. The purchaser of the sign for Ellen constantly gave Mullen and Jackson updates on her condition so they could plan on when to place the sign.

“We found ourselves feeling like part of the family,” Jackson said. 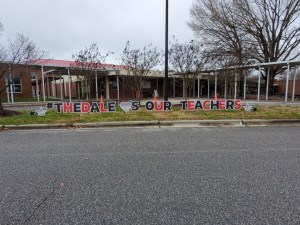 The majority of their marketing is done through Facebook and email.

“A lot of our customers that we have recently gained know somebody else that has had a greeting put in their yard,” Mullen said.

The ladies handle both setting up the signs and taking them down, which usually takes place around 7 p.m.

“We like to say we’re ninjas because we come under the cover of darkness and you usually don’t know we’re there,” Mullen said, adding that she even surprised Jackson with a sign for her birthday.

“To walk outside and see that (the sign), I know I was filled with joy so I can only imagine how my customers felt,” Jackson said of first seeing her birthday greeting.

And surprise is really the key to spreading the joy. Since the celebratory greetings are intended for a targeted person or small group, Mullen and Jackson work with the purchaser to make sure the recipient doesn’t find out until the morning.

Chelsea Dunston first learned about the business on Facebook only a few days before contacting them about her daughter Mollie’s fifth birthday. She said her daughter was “extremely excited” about waking up to a birthday sign in her yard. It also helped make up for the lack of a traditional in-person birthday party.

“She was definitely bummed we couldn’t have her typical party and some of her cousins could not come,” said Dunston, who lives in Albemarle. “It was just something special that she didn’t know existed and wasn’t expecting and made her feel like a little princess for a day.”

With so many people spending time at home and avoiding traditional celebrations like birthday parties, the pandemic environment has been a boon for the fledgling business.

Though they’ve gone to a few locations in nearby counties like Anson and Cabarrus, the majority of their clients have been based in Stanly County.

For both women, who still have full-time jobs, the business has meant so much more than merely making some extra money.

“We literally started this company because we knew that people needed to be uplifted during this time,” Mullen said. “People need happiness, people need reasons to smile.”

Even once the pandemic ends, Mullen and Jackson plan to continue their business. They are already gathering materials and preparing for when they hope to expand beyond birthdays and marriages to include celebratory greetings for high school and college graduates along with holiday-themed signs. The business has also been thinking about creative ways to give back to the school system.

“We plan on being in Stanly County for years to come,” Mullen said.