A Stanly County native is part of a new group that’s been working with members of Congress to address divisions and racial inequalities in the United States.

Dr. Charles Chavis, a West Stanly High School alumnus and an assistant professor at the Jimmy and Rosalynn Carter School for Peace and Conflict Resolution at George Mason University in Virginia, is one of five co-chairs of the U.S. Movement for Truth, Racial Healing, and Transformation (USTRHT) Movement Leadership Group, which formed in November.

Chavis, 30, who grew up in Stanfield, said the truth commission is about America “healing and confronting our historical mistakes.”

He said that the divisions within the country that have been exacerbated since the election helped lead to the creation of the group.

“We wanted to use the resources, our knowledge and our skills to do whatever we can to promote healing and justice-centered peace in our country,” he said. “We felt like we had to help any way we could.” 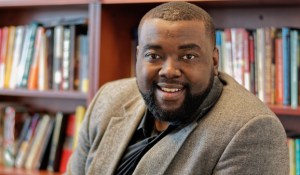 Charles Chavis, who graduated from West Stanly High, is a professor at George Mason University. Photo courtesy of Charles Chavis.

One of the group’s top legislative priorities, and one of the key reasons why it was created, is to support the resolution passed by Congresswoman Barbara Lee, a Democrat from California, last summer to establish the country’s first commission on truth, racial healing and transformation “to properly acknowledge, memorialize, and be a catalyst for progress, including toward permanently eliminating persistent racial inequities.”

Over the past few months, Chavis and other members of the group have met with Lee and her staff along with aides to U.S. Sen. Cory Booker (D-NJ), who introduced legislation in the Senate for the creation of a truth commission last month.

Chavis and other members of the USTRHT have been in contact with members of President-elect Joe Biden’s transition team. One of the group’s short-term goals is for Biden to establish a truth commission within his first 100 days in office.

Chavis emphasized that before any conversations about racial healing can be had, the country must first start to reckon with truths about its history and how certain groups of people have been cast aside or overlooked.

“The goal is that the truth will be put out there and this means the whole truth of the U.S.,” he said. “We know in terms of our history that certain narratives are privileged historically. Our first goal is to provide marginalized communities who have maybe been overlooked within the larger story of America and include their narrative into the national narrative.

“When we have those real conversations and narratives are acknowledged and understood, then we can actually talk about real social transformation that can take place. We have to embrace each other’s shared humanity.”

In order to help address racial inequities in the country, the group created a multi-faith task force to work with a host of faith groups including evangelicals, black churches, and Muslim and Jewish communities.

Chavis also stressed that as a bipartisan organization, USTRHT wants to align itself with open-minded, bipartisan leaders who will work with all kinds of people.

“We’re really just trying to tap into every community around the country to really push for racial healing and social justice because we believe that we have to deal with justice before we can really have peace,” Chavis said.

Aside from Chavis, the other co-chairs include: Dr. Marcus Hunter, professor of Sociology and African American Studies at UCLA; Dr. Gail C. Christopher, the executive director of The National Collaborative for Health Equity; Shelly Marc, the civic engagement and racial justice public policy manager at Instagram; and Liz Medicine Crow, president/CEO at First Alaskans Institute.