The Pfeiffer University Athletics Department announces the hiring of Meredith Novack as the next head coach of the Falcon women’s swimming program.

Novack comes to The Village having previously served as the volunteer coach with at the University of Hawai’i at Manoa. She coached distance and breast stroke, helping Hawai’i swimmers to the NCAA Finals. She has coached Cherelle Oestringer, the Swiss National Champion in the 800m, 5K and 10K freestyle, Haley Chasin (North Shore Series Champion and Double RoughWater Champion), and mentored Stephanie Peacock (third-place finisher in the 800m freestyle at the 2016 U.S. Olympic Trials in Omaha, Nebraska, and member of the US Open Water National Team). 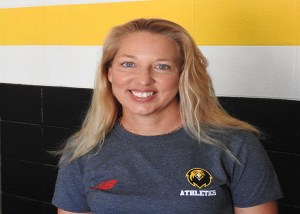 Meredith Novack has been named the new swimming coach at Pfeiffer University.

In 2004, she was elected as a USAT AAC Representative, advocating the views of professional triathletes from across the country.

As a triathlete, she competed internationally for 14 years. In 2004, she was elected as a USAT Athlete Advisory Council representative, advocating and representing the collective views of professional triathletes from across the country.

In her career, she represented the U.S. at four World Championships.

On Sept. 22, 2013, she became the first female to swim the Lanai-to-Maui-to-Lanai, otherwise known as the Auau Channel, a 32K open water swim and did so in a world-record time of 11 hours and one minute.

Novack has ties to the Charlotte, area having trained at SwimMAC and at nearby Queens University.

A standout swimmer at Georgia Southern University in Statesboro, Georgia, Novack competed in 100 and 200-yard backstroke, the 400 IM and the 400 medley relay, lettering for the Eagles.

Meredith was the captain of the United States team at the 1996 World University Games Triathlon Championships held in Liberec, Czech Republic.

Following her retirement from professional competition, Novack has acted as a triathlon consultant and has worked at the World Triathlon Championship at Kona, Hawaii on several occasions and has served as a brand representative for On-Running shoes, BeachBody and Ironman.

In addition to her athletic pursuits, Novack has pursued a career in sports modeling and has had past sponsorships with brands including Gatorade, Reebok, Riverflow by Current Systems and Mokulele Airlines.

“We are fortunate to have someone of her caliber join our team,” said Pfeiffer Director of Athletics Danielle Lafferty. “Meredith brings both tremendous personal and professional experience and accomplishments to our program and we are excited to see all that she can bring to both our swimming program and to our University. She has such passion and love for the sport that I believe will take our swimming program to the next level.”

A native of Florida, Novack earned her undergraduate degree in sports management from Georgia Southern in 2000.