During a Monday morning community meeting centered around the continued development of downtown Albemarle, Albemarle Economic Director Keith Tunnell presented an update on arguably the biggest project taking place in the city: the Albemarle Business Center.

Having been in the works for the past several years, the ABC is a 287-acre business park at the crossroads of U.S. Highway 52 and N.C. Highway 24-27 that can hold up to 2.5 million square feet of industrial and warehouse space.

Initially designed by previous economic director Mark Donham, who retired last summer, the business park is modeled after the Monroe Corporate Center, which Donham helped create during his time as economic development director for the city.

During the city council’s Dec. 21 meeting, the council approved a phased buildout of the ABC which included construction on only the front section of the industrial park, partial road build and provided infrastructure to the property. The estimated cost of this was around $8 million.

The industrial park is estimated to create 2,800 manufacturing jobs and generate under $1 billion in total new investment. Revenues from the new industry could be earmarked to support future downtown development.

Tunnell presented a long list of several initiatives he and his economic development team will be focused on this year. They include: establishing free public WiFi throughout downtown Albemarle; creating a standalone Economic Development/Main Street website; improving marketing and promotion of both city and ADDC events; working to assist women, youth and minorities seeking to open a business; developing an Albemarle Downtown app; and launching City of Albemarle Small Business Revolving Loan Fund.

Assistant City Manager Nyki Hardy presented two downtown projects that are in the pipeline. She is a member of the Downtown Vitality Project Team, which is working to implement the projects to help revitalize the area.

The city is working to establish a placemaking project for people to enjoy at the King alleyway behind Off The Square restaurant. Placemaking projects are created to bring people together in a public space and can range from the small (installing adult-size board games in a park) to the very large (the Cloud Gate structure located at Chicago’s Millennium Park).

Hardy mentioned that the city wants to create numerous placemaking projects in downtown to help attract more people to the area.

For the King alleyway project, the team is working with an electrical engineer to install decorative poles for hanging string lights, banners and flags and is working with a landscape architect to flesh out a specific design plan. Elements of the plan that have been discussed include seating for dining/relaxing, areas for vegetation, board games, murals and a performance stage. 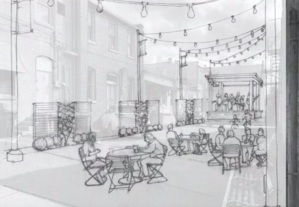 A pencil sketch of possible design elements that could be implemented to revitalize the King alleyway.

Hardy said the city expects the draft design plan to be ready in a few weeks and the decorative poles to be delivered by late spring. The design plan will be vetted by downtown stakeholders and city council before it’s finalized.

The goal is for the alley project to be completed by the end of the year.

“We’re really excited about that and we hope the community is as well,” Hardy said.

The DVPT is also working on a wayfinding project to better help people navigate the downtown area. Wayfinding refers to information systems that guide people through a physical environment.

The city is working to create wayfinding signs that will help point people to destinations and attractions (restaurants, shops, historic locations). 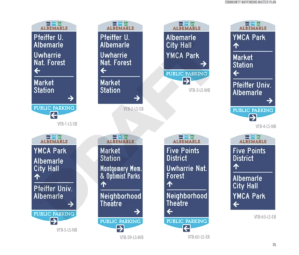 Examples of some wayfinding signs for the city.

The team has been working with a consultant for the past year and is currently finalizing a draft plan. The goal is to present the wayfinding plan to council before the end of the fiscal year in June. They hope to implement the plan by the end of the calendar year.