‘It’s definitely been a 180-degree change’: Civic groups have adapted to shifting environment 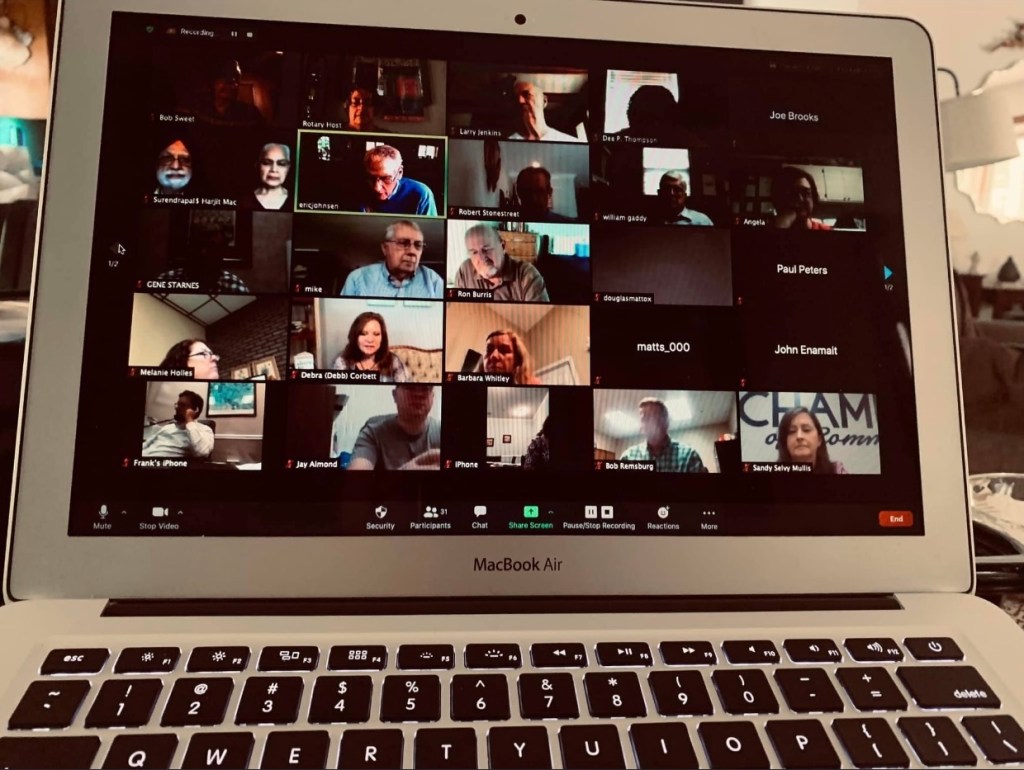 Due to the pandemic, members of the Albemarle Rotary Club have been meeting online via Zoom since the spring. Photo courtesy of Jan Goetz.

Each Thursday at noon, members of the Albemarle Rotary Club would meet for lunch at Atrium Health Stanly to discuss upcoming projects and fundraisers, listen to guest speakers and enjoy each other’s fellowship.

This now seems like a lifetime ago. The last in-person meeting was held in March 2020, right before the coronavirus pandemic descended upon the country. Many of the club’s projects and fundraisers were canceled or postponed.

Since the spring, the members still meet every Thursday, this time, though, it’s through the virtual platform Zoom. Though the club has around 100 members, around 40 typically join the Zoom meetings, said President Jan Goetz.

Other local civic groups, including the West Stany Rotary Club and the Norwood Lions Club, have also moved to Zoom in order to conduct meetings.

Though the Lions Club was initially conducting all of its meetings exclusively via Zoom, over the last few months the club, which has around 18 members, transitioned to a hybrid model — a few people meet in-person at Piney Point Golf Club while the rest participate via Zoom.

“A lot of our members are elderly and have pre-existing conditions, so it’s pretty important for them to feel safe to be able to participate that way remotely,” First Vice President Dennis Layton said.

Due to its small size, the West Stanly Rotary Club, which has around 30 members, began conducting several in-person meetings in the fall, where around a dozen people were in attendance, said President Carmen Nunalee. But with increased cases in the state and Gov. Roy Cooper’s order limiting indoor gatherings, the club stopped meeting in-person and has transitioned back to Zoom.

Even though the clubs have taken slightly different approaches for how to best conduct their meetings, they have all done the best to navigate through a year that’s been anything but normal.

“It’s definitely been a 180-degree change, that’s for sure,” said Goetz, the Albemarle Rotary Club president, about adapting to the changing environment. There are many members of the club that she has not physically seen since the last in-person meeting.

And nothing could have prepared Goetz, who has been president since July, for a leadership position that has existed almost entirely online.

“When they asked me to be president two and a half years ago for this year and I said yes, I had no idea that this is what my presidency was going to be,” she said.

Pandemic has caused a financial hit

Many of the clubs depend on a few key fundraisers and events throughout the year to raise a large share of revenue. Unfortunately due to the pandemic, many of these events have had to be canceled and tentatively rescheduled to this year.

Two of the three biggest events for the Lion’s Club were canceled due to the pandemic. Though the club was able to place flags around downtown Norwood last January, after collecting $30 sponsorships from businesses, the club had to cancel its low-country shrimp boil, scheduled for May, and its skeet shoot scheduled for last September. Both events are tentatively slated to take place this year.

The Albemarle Rotary Club also had to cancel its annual barbecue fundraiser at the YMCA Pavilion. One of its biggest annual events, the club typically sells 2,000 plates, Goetz said. In order to reduce the amount of traffic at the event, the board of directors talked in the summer about reducing the number of plates to 1,000. After results from a survey revealed that only around half the members felt comfortable helping with the event, the club postponed it until this April. The club’s other big fundraiser, the Rotary Golf Tournament, was postponed from May until September.

Though the West Stanly club was able to hold its annual golf tournament in October, many other events, including the end-of-the-year Christmas social, were canceled.

“Everybody misses that fellowship”

Goetz has discussed with the Albemarle Rotary board of directors possible locations to eventually begin socially distanced in-person meetings, including the YMCA pavilion, but with case numbers continuing to fluctuate in Stanly and across the state, face-to-face meetings are simply not yet feasible.

While the club has had to postpone events, one of the hardest adjustments has been the lack of personal interactions.

“Everybody misses that fellowship,” Goetz said. “We usually sat around the table with the same folks every week.”

Throughout the year, Goetz has sent out surveys to the members assessing how comfortable they would be to either begin holding in-person meetings or to come together for various fundraisers. While many members said they were willing to meet again, others — including many older, retired members — weren’t ready.

“I want the majority of the people to feel comfortable,” she said. “We have to remember that we have to give each other grace. A lot of times you’ve got to get out of your own brain and put yourself in their shoes.”

At the beginning of each Zoom meeting, Goetz makes an effort to talk with each member as they log on. Throughout the week, in addition to her work as a hospice nurse, she reaches out to members that haven’t attended the meetings to make sure they are okay and staying safe. She sends out monthly emails updating members about what’s been going on. Goetz also connects with members who are ill, including calling or sending them cards, to make sure they feel included and not left out.

The West Stanly club takes a different approach to the beginning of its meetings. In order to try and reproduce the fellowship that naturally exists during traditional face-to-face meetings, the initial 10 to 15 minutes of each Zoom meeting is carved out for people to talk with each other and hang out, Nunalee said.

One silver lining with Zoom meetings Goetz has found is that it’s easier to schedule speakers because, unlike with the in-person meetings at the hospital, the speakers can log in from anywhere in the state.

“We’ve had people give programs that normally we couldn’t get because they’re in Raleigh or other places and physically couldn’t come here to do a program,” Goetz said. “In that sense, that’s one positive.”

Even when Albemarle Rotary does transition back to weekly in-person gatherings, Goetz said the meetings will still be streamed virtually for members who are either too busy to attend or don’t yet feel safe in a room with others.

While it’s still an uncertainty what the pandemic will look like, each club is doing it’s best to be as flexible as possible.

“We’re lucky that our club has really done well and survived during it (the pandemic) and we’ve made the best of a horrible situation,” Goetz said.