Boa constrictor gets stuck in the dashboard of car 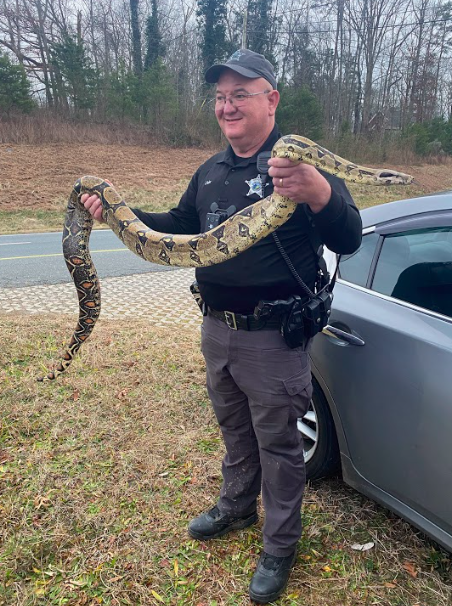 On Monday, officers with the Stany County Sheriff’s Office and the Animal Protective Services responded to a call many had likely never experienced before.

A large boa constrictor got stuck in the dashboard of the owner’s car on the way back from a visit to the vet.

Sheriff Jeff Crisco said that while the owner was stopped at a business in the western end of the county near the Endy area, the snake slithered out of its cage and to the front of the car, presumably because it was trying to get warm.

“I’d never seen anything like that before,” Crisco said, who was one of the officers on the scene. “I wanted to see it first-hand.”

Crisco estimated it took around 30 minutes to retrieve the snake and place it back in its cage.

“The snake wasn’t going to come out until he was ready to come out,” he said.

The owner said the snake was around 8-and-a-half feet long and weighed around 40 pounds, Crisco recalls, adding that the owner is not from Stanly County.

Stanly County Animal Protective Services shared a photo of the large snake before and after it was safely removed from the car.

“It is never a dull moment at APS, and yesterday was not any different,” APS posted on Facebook. “Our officers were dispatched out to a situation where a pet Boa Constrictor got himself stuck in the dashboard of his owner’s car, while on the way back from the vet.”

APS noted the snake was “removed unharmed” and is “now back at home.”