PEEKING INTO THE PAST – The Southern Vidette 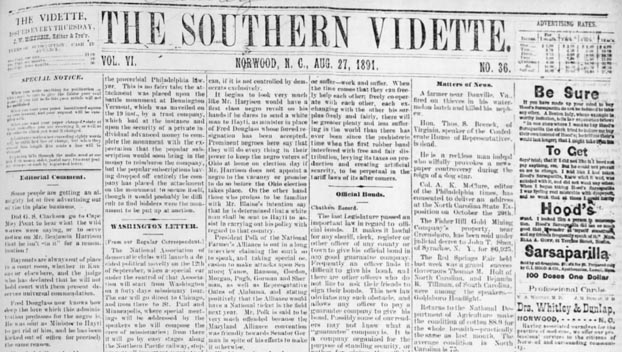 The Montgomery Vidette, based in Troy, began in December 1885. It was published by E. Hurley and J.W. McKenzie.

By August 1891, the publishers were looking for a larger audience and decided to relocate to Norwood in Stanly County. The paper, published by J.W. McKenzie, was renamed the Southern Vidette. Other newspapers in the state on occasion would publish stories from the Norwood Vidette, but as far as can be determined this was never an official title.

In February 1893, J.W. McKenzie, along with a partner, purchased the Carolina Watchman out of Salisbury. During August, the Southern Vidette was merged into the Watchman and the Vidette ceased publication. The Vidette presses and equipment were put up for sale.

In early November it was announced that T.B. Eldridge had purchased the Vidette and moved everything to Statesville to start a new paper to be known as The Mascot.