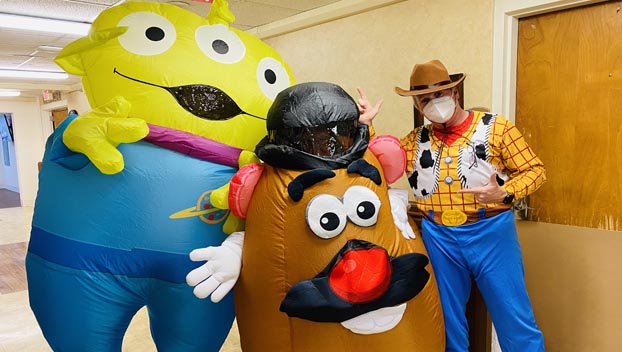 Over the past year, the staff at the senior living community of Trinity Place in Albemarle have created a fun and interactive way to bring smiles to the faces of their residents.

At least once a week since last April, three costumed members dubbed the “Hall Hoppin’ Heroes” sing and dance their way throughout the facility, for up to an hour, safely interacting with as many residents as possible.

The staff in the videos and photos are  Cora Ingle, Tracy Dean and Jerry Hunter. Each week, the trio debuts new costumes, themes and songs to the delight and fanfare of the residents.

Once they were characters from the beloved cartoon show Scooby Doo — Hunter was Scooby, Ingle was Velma and Dean was Daphne — while another time, they donned ponchos and sombreros, along with mustaches affixed to their masks, and treated residents to the Macarena. 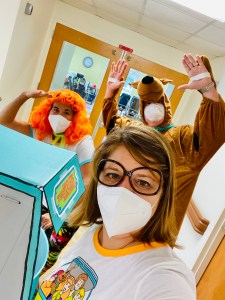 The trio’s name came after they literally hopped around in bunny costumes for residents last Easter.

“We thought about how can we bring them joy and we just did a simple little dance and you could see their smiles and their interactions and so we decided to make this a weekly thing,” said Ingle, life enrichment director.

And as soon as the residents start to hear the music blaring, they quickly move to the hallways to dance with the group.

But “H to the third power (H^3),” as they refer to themselves, have acquired some newfound social media fame as a recent TikTok video of them dancing in “Toy Story” costumes to the Christina Perri song “You’ve Got a Friend In Me” has gone viral.

The video, which is about 20 seconds, has already racked up roughly 560,000 views, 1,400 comments and 926 shares, and is quickly touching the hearts of people on the social media site.

Kidd started a TikTok account for Lutheran Services Carolinas a few months ago because she thought it might be a fun way to showcase what their staff members have been doing to keep residents’ spirits up. She also thought this would be a way to connect with some of the younger generation.

And while Kidd has uploaded 20 videos over the past few months, none have taken off quite like the “Toy Story” one. She thinks the combination of the characters (Mr. Potato Head, Woody and the small green man) and the uplifting song, along with footage of residents smiling and dancing, is a big reason the video has received so much attention.

Kidd, who works with eight senior living facilities, said that while all of them have found creative ways to connect with residents, “I think that Trinity Place dresses up the most and definitely does the most dancing from what I can tell.”

In addition to the costumes the group wears, they also customize a cart they push around to offer food to the residents. For “Toy Story,” the cart transformed into a giant pink piggy bank while for Scooby Doo, it was the iconic Mystery Machine van.

“The residents, they like to eat, so you have to bring them a treat,” said Dean. “The cart was an extension of our costume in a way to transport the treats and whatever we give them that week.”

But for the group, as much as they have enjoyed the extra attention, their focus has always been on making sure their residents are happy and doing well. The trio’s goal each day is to reach at least one person with a smile.

“It doesn’t feel like it’s a job because we all get so much joy doing this,” Hunter said. “We see them smile and then it lifts up our spirits.”

As bad as 2020 was, it did allow groups like the Hall Hoppin’ Heroes to tap into their creative side to bring some much-needed joy to residents and other staff members.

“It made us look at a different avenue to actually meet the needs of our residents,” Ingle said.

Even after the pandemic ends, the group plans to continue donning new costumes and dancing with the residents.

“There still can be joy, even in these circumstances,” Ingle said.