PEEKING INTO THE PAST – West Badin principal Grover Hines

His family moved to Chattanooga where he received his early education. He graduated from Morehouse College in Atlanta in 1942 with a degree in Science and Biology.

After graduation, Hines became a teacher at a school in Washington, North Carolina. Here he met Bertha Little, whom he married Nov. 28, 1943. 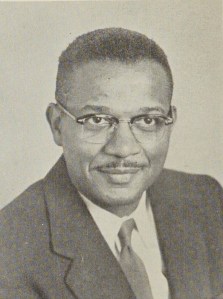 Hines next taught at Kingville School in Albemarle and then was principal of the Chapel School in Franklin from 1945 through 1954. During this time, he completed work on his master’s degree from what is now known as North Carolina Central University in Durham.

In the fall of 1954, Hines became principal at West Badin School. He served in this role until the school was closed in the spring of 1968 due to the integration of the Stanly County schools.

Hines went on to serve as an elementary school principal in the Currituck County school system and then Weeksville Elementary in Pasquotank County until he retired in 1982.