Paul Hinchliffe is set to open his third Main Street Cup and Cone location in Albemarle sometime in March.

Roughly two years after opening his first location in downtown Oakboro, owner Paul Hinchliffe is set to open his third Main Street Cup and Cone coffee house in Albemarle in the coming months.

The business, which offers around 40 flavors of ice cream, coffee and an assortment of sweet treats, opened its second location last summer in Locust Town Center.

The Albemarle store, which will feature a drive-through, will be along N.C. Highway 24-27 inside Sun Plaza Shopping Center next to Academy Eye Center. Hinchliffe’s daughter Merideth, who is currently the manager at the Oakboro location, will manage the Albemarle store.

Hinchliffe hopes to open the new location sometime in March. It will be designed in the same fashion as the other two and will be about 1,200 square feet, the same as the Locust location.

Being a family run business, his goal is to open four locations in the area for each of his four daughters, who are currently working with him in some capacity, to manage. His daughter Elaina runs the Locust location while daughter Kayla will take over from Merideth in Oakboro.

“It’s really fulfilling,” Hinchliffe said about his daughters running the locations. “I think the most pride I have is their desire to help the community.”

The Oakboro store, which opened in November 2019, has hosted food drives in the past and also collected presents to give to kids for Christmas.

Most of the food comes from local businesses. The coffee comes from Pure Intentions Coffee in Charlotte, while the baked goods are made by Stanly County resident Mia Hatley Lanier.

While Hinchliffe is a little nervous about taking the next step in expanding his ice cream/coffee footprint in the county, he’s excited for his employees and for the residents of Albemarle, many of whom already frequent the western Stanly locations.

While he knows it seems odd to open another store during the pandemic, he said it was all part of his original plan which he created well before COVID-19.

“We had a vision and we wanted to fulfill the vision even though it’s risky and has been risky,” he said.

Like most businesses which rely on heavy foot traffic, the two Main Street locations have been struggling over the past year with the pandemic. 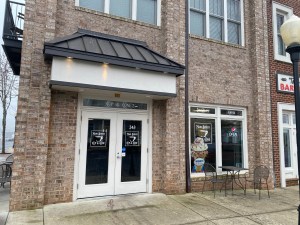 “This past year has been challenging,” Hinchliffe said. “We’re feeling the restrictions of all the Covid stuff with people not coming out and not having money.”

To make sure everyone is as safe as possible, employees wear masks and gloves, the tables are spread out and proper sanitation protocols are followed, he said.

While in-person business has been down, Hinchliffe said they have gotten more orders for curbside delivery — with the help of the Joe Coffee Order Ahead app — which has helped them to stay afloat.

“The main goal is to stay above water and wait it (pandemic) out like we’ve been doing,” Hinchliffe said.

But with so many shops going out of business, he said he’s “just fortunate” to continue providing service to the community.