The pawpaw is a fruit tree native to North America and was here long before the Native Americans migrated to this continent. The pawpaw once grew wild in most of the Mid-Atlantic States east of the Mississippi, but in most locations the wild pawpaws have disappeared. 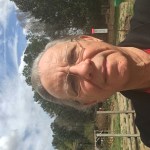 Hernando De Soto observed pawpaws during his expedition throughout the southeast United States in 1541, and this is the first documentation of pawpaws by a European.

The pawpaw, a member of the Annonaceae family, is the only member of that family native to North America. All remaining members grow in Central and South America. Its scientific name is Asimina triloba.

Pawpaws have large leaves approximately 4 to 5 inches wide and 10 to 12 inches long giving the tree a tropical appearance. Pawpaws may grow to a height of 35 feet. The foliage grows in an attractive pyramidal shape; but, if unkempt, pawpaws will form a clonal thicket. In the fall pawpaws have bright yellow leaves making them a good choice for landscaping.

The pawpaw produces the largest fruit of any native tree in North America. The fruit is approximately 2 to 3 inches in diameter and 4 to 6 inches long and may weigh as much as a pound. Pawpaw flesh has a taste described as a cross between banana and mango and is very nutritious.

Why have most people never seen a pawpaw? The answer is shelf life. Pawpaws become overripe in a few days, so that you will probably never see one in a grocery store, but may see them at a farmers market in late September or early October. Pawpaw fruit is very nutritious and actually has more vitamin C than an orange.

The pawpaw flower is red-purple or maroon and is 2 to 3 inches across. The flower has a faint fetid odor and does not attract honeybees. Fruit flies, carrion flies, and beetles pollinate pawpaws.

The twigs, roots and leaves of the pawpaw contain a chemical called acetogenin that makes the tree deer resistant as well as resistant to most insect pests. Scientists at Purdue University have done research on acetogenin, as a cancer fighting agent and the results of this research is very promising.

Please visit https://plants.ces.ncsu.edu/plants/all/asimina-triloba/ if you would like to learn more about growing pawpaws.

Richard Morton is a Certified Extension Master Gardener Volunteer and enjoys growing vegetables in his garden in Oakboro.