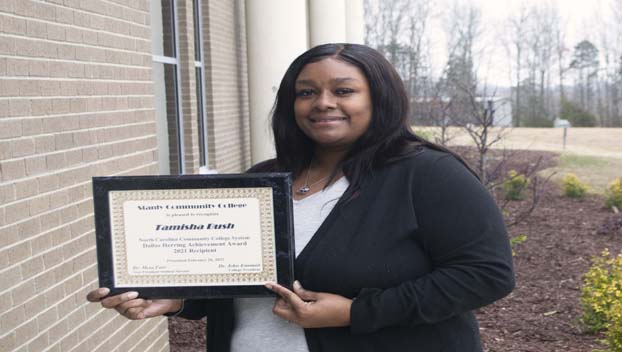 Presented annually, the students are nominated by members of the SCC faculty and student organization advisors. Each of the 58 community colleges in the system may select one student to be listed as the state Academic Excellence Award recipients for the year.

Hannah Barnhill, an accounting and finance student is this year’s honoree from SCC. 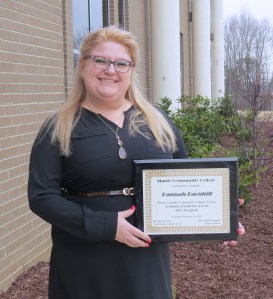 Hannah Barnhill, an accounting and finance student from Midland was nominated for the Academic Excellence Award.

Barnhill, from Midland, is scheduled to graduate with honors this spring with an associate in applied science degree in the accounting and finance program.

In addition to her academic achievement, she serves as president of the college’s Phi Beta Lambda (PBL) chapter and is the chapter’s entry in an Accounting and Future Business Executive competition at the upcoming state Phi Beta Lambda online conference.

In the essay that accompanied her nomination, she wrote, “At age 18, SCC gave me the safe environment to complete my high school education and obtain a job that laid the groundwork for achieving future goals. After successful years in cosmetology, I returned in 2018 for another chapter that brought me back to my love of accounting and finance. I hope I have set an example of the importance of not giving up and working hard, even if others doubt you. I am thankful for my opportunities at a college that has ‘had my back’ and encouraged me to succeed.”

Receiving the Dallas Herring Achievement Award is Tamisha Bush. The award is presented to honor Dr. Dallas Herring, who served as chairman of the North Carolina Board of Education in 1963 and is considered the “father” of the state’s community college system.

His philosophy for the system centered on making post-secondary education available to all citizens at a reasonable cost and the member colleges taking students from whatever educational level they entered to a level that offered them a successful career.

Bush is from Kannapolis and is scheduled to graduate this spring with an associate in applied science degree from the Early Childhood Education: Birth-Kindergarten Licensure Track or transfer to a UNC system university.

In her nomination materials her instructors wrote, “Tamisha’s dedication and positive attitude has helped her be successful despite adversities. She is eager to learn and has a passion for children, being both a parent and a foster parent. Her goal is to provide outstanding classroom instruction and daycare activities for children.”

The Robert W. Scott Student Leadership Award is given in honor of the 1969-1973 governor of North Carolina who later served as president of the state community college system. 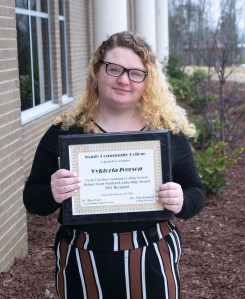 Vyktoria Iverson, an accounting and finance student from Albemarle was nominated for the Robert W. Scott Student Leadership Award.

The SCC honoree is Vyktoria Iverson, an Albemarle student working toward an associate in applied science degree in the accounting and finance program.

Iverson serves as president of the College’s Student Government Association (SGA) and is a second-year member of Phi Beta Lambda. She received third place in the state Phi Beta Lambda Personal Finance event last spring. She was recently named the recipient of a memorial scholarship from the family of Ann Kiser, former secretary to three SCC presidents prior to her retirement.

“I would not change my time at SCC for anything,” Iverson wrote in an essay that accompanied her nomination. “Being here has taught me that I am capable of succeeding and even becoming a leader. I want to prove to myself and show others that success can come despite obstacles. SCC’s students and employees have inspired me, and my goal is to encourage others just as I have been helped along the way. Through SGA and PBL I have learned the valuable leadership lesson of thinking of others and not always myself.”

All three have been recognized on campus and will receive plaques during the 2021 Student Honors Ceremony and graduation.

“Stanly Community College is very proud to have these three students representing us at the state level,” SCC President Dr. John Enamait said. “They have excelled in their curriculum programs and have been positive influences on the student body. Their success exemplifies a large number of individuals on our campus and reflects the commitment of the faculty and staff to our students.”