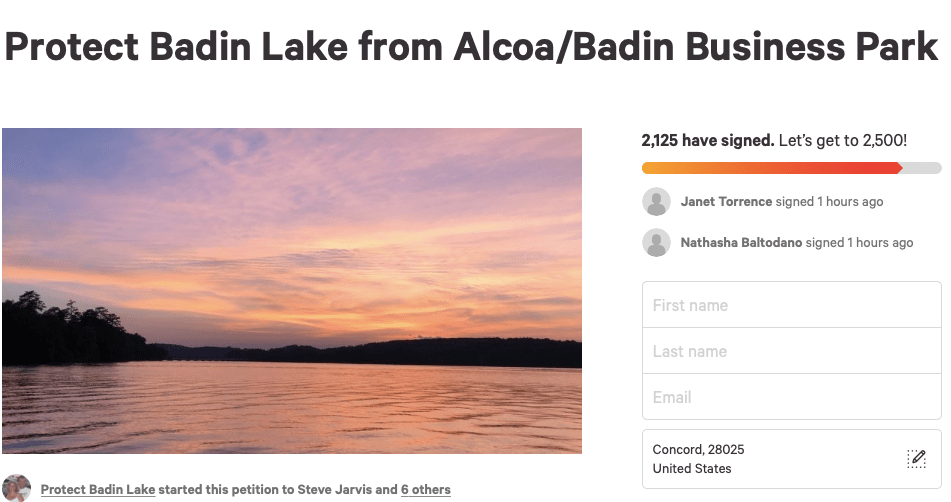 With Alcoa working on a proposed deal with the state to discharge contaminants into Badin Lake, a group of concerned local homeowners recently created a petition to spread awareness about the need to hold the company accountable.

“As homeowners, we just recently were talking about ‘well what can we do?’ and we came up with the idea of this petition to try and make sure a lot of people are aware of what’s going on,” said homeowner Gerald Ramoin, who started the petition and has a home in Heron Bay.

The “Protect Badin Lake” petition on Change.org was created only this week, but it has already amassed more than 2,400 signatures. The goal of the petition, Ramoin said, is to prompt N.C. Department of Environmental Quality to conduct a public hearing about the proposed deal, also called a Special Order by Consent.

Ramoin said the group of homeowners has already personally contacted DEQ about the need to hold a public hearing regarding the SOC.

“We want to make sure we have a voice in what they’re doing to our environment,” he said.

“The Division of Water Resources Director is reviewing all options, with the proposed SOC being one of them,” DEQ spokesperson Anna Gurney told the Stanly News & Press last week.

Ramoin said the group has also been in contact with other concerned parties, including the Yadkin Riverkeeper, Duke University’s Environmental Law and Policy Clinic and the Southern Environmental Law Center, which represents a group of concerned citizens in West Badin.

Many people have left comments on the petition page about the dangers of contaminants leaching into the local waterways.

According to Ramoin, comments posted on the petition page are automatically forwarded to state officials, including Sen. Carl Ford and Rep. Wayne Sasser, to make them aware of the problem.

Sasser said he has received around 150 emails and knows about the issue. He is part of a group of state legislators (along with Ford, and Reps. Ben Moss and Carla Cunningham) who will meet with DEQ next week.

“We don’t want them (Alcoa) to be able to dump any of that stuff in the lake,” Sasser said. “They need to spend some money and figure out how to handle it or haul it away. That’s not a dumping grounds for all their problems.”

Under the deal, Alcoa would divert contaminants, including cyanide and fluoride, from its current discharge point, which flows into Little Mountain Creek, to another location, which would flow into Badin Lake.

Exposure to small amounts of cyanide can cause dizziness, headache, nausea and vomiting and rapid breathing, according to the Centers for Disease Control and Prevention, while large amounts could cause respiratory failure leading to death.

Alcoa opened its aluminum smelting operation in Badin in 1917 and buried tons of the spent potliner, a byproduct of smelting, on its property and throughout much of Badin when there were no hazardous waste regulations prohibiting their disposal, sources said. Although Alcoa shut down its Badin operation in 2010, the hazardous material is still buried in the ground.

“We use the lake, we swim in it, our children swim in it,” Ramoin said. “We’re concerned for our safety.”