One of Stanly’s earliest educators built school for Black children

The Norwood Colored School in 1917 with Professor H.S. Sellers pictured seated to the far right. Photo courtesy of Megan Sullivan.

While many Stanly County residents have heard of Elbert Edwin “E.E.” Waddell, an educator at the old Kingville High School during the mid-20th century whose name is synonymous with the community center in South Albemarle, few have probably heard of H.S. Sellers, one of his Black educational predecessors.

Born sometime in the late 1850s to early 1860s, Sellers originally moved from Chatham County to the southern part of Stanly County in the early 1890s, according to historian Lewis Bramlett. After originally teaching in a small school room, Sellers, who attended Shaw University in Raleigh, soon built his own preparatory school for Black children called the Carr Academy.

Bramlett notes that according to the March 31, 1892 edition of the Southern Vidette, a newspaper that was based in Norwood, Sellers was a supporter of industrialist Julian S. Carr, who ran for lieutenant governor in 1880 and later for U.S. senator, “so this is possibly the reason for the name of his school.”

Incorporated by the General Assembly of the State of North Carolina on Feb. 9, 1893, the Carr Academy served Black students in Stanly and surrounding counties.

“This was very important for the community, as there were not a lot of learning opportunities available for African American children at the time,” Stanly County Historical Director Megan Sullivan said.

According to his obituary, published in the Stanly News & Press in 1937, “he was really the pioneer teacher of his race in this section” and gave Black people “their first real opportunity to secure the foundation of an education.”

The school building burned after a few years and Sellers went on to teach at the Norwood Colored School, where classes were held at Bennettsville A.M.E. Zion Church. (Bramlett notes this was before the creation of the Rosenwald schools in the early 20th century for Black children throughout 15 southern states.)

He was teaching in Cottonville when he died of pneumonia in January 1937. His obituary estimated that Sellers was around 80 years old when he passed. Funeral services were held at the Bennettsville Church in Norwood.

He is buried at the church and shares another name on his gravestone (Captoria Lilly, who was born in 1860 and died in 1932), indicating that he was possibly married, though no written record exists. The death year on the gravestone is incorrect. 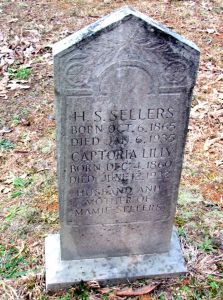 His obituary said Sellers “was of great service to his people of this section with whom he labored for more than two decades.”