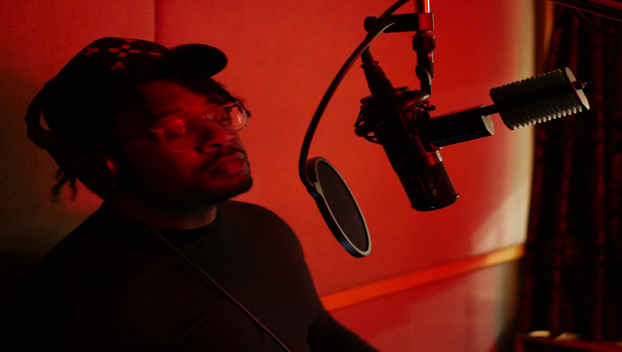 James London, who's from Albemarle, recording his version of Shania Twain's "Still the One." Photo courtesy of James London.

It had been about five months since James “LNDN” London last recorded a song. The Albemarle native is not sure why he had stopped — maybe it was due to the pandemic, he mused, or possibly the contentious nature of last year’s presidential election.

But what he does know, as he walked into Castle Hill Studios in Atlanta last month, was that he was excited to get back to work and focus on his next project: an R&B version of Shania Twain’s hit 1997 song “You’re Still the One,” which always resonated with London, who has a deep appreciation and love for country music.

As a 34-year-old southerner, he feels a special kinship with country music, especially with the powerful stories that are conveyed through the rhythms and lyrics.

“A country song you can listen to and get therapy from, you can get relief,” said London.

While country music is largely the domain of white performers and is often marketed to white audiences, London, who is Black, said it still has significant appeal for African Americans since “a lot of country comes from original blues.”

“Inherently the frequencies of a good country song mesh with our souls,” London said, noting that some of his favorite country songs include Carrie Underwood’s “Before He Cheats” and Rascal Flatts’ “What Hurts the Most.”

But Twain’s song has a special place in his heart.

“When I listen to it I feel love, hope and joy,” he said. “I feel weightless and in rhythm with the world around me. For a moment time stops and everything is right.”

The song, which he released in late January, is one of more than 600 that he’s recorded and produced during his nearly 10-year music career. He’s released several albums, including “Trap Country” and “Trap Christmas,” and one of his songs even appeared in a popular film that debuted last year.

For London, how his music makes people feel is just as important as what his music says.

“My mission with music is to touch the soul,” he wrote on his website. “If along the way, I could provide my fans with some keys to help unlock some of their mysteries, I take pleasure in that too.”

Discovering a love for music

Growing up in Stanly County, London, whose real name is James Fitzgerald Smith II, never thought much about music. Even though he came from a family of singers who performed in church, he did not as a young child. He also never sang in school.

But things changed when he was 13 and a friend gave him an Alicia Keys’ CD. As he was listening to her song “Troubles,” he unexpectedly began to cry, moved to tears for the first time by a song that would help shape the person he would become.

“It was just really touching,” he said. “I guess I was going through trouble and she was just telling me to let it go and I could actually feel it and it moved me and I just wanted to be able to do that to people.”

Acknowledging that her song “unlocked something in me,” London quickly bought a keyboard. He took the time, painstakingly note-by-note, to teach himself how to play “Troubles.”

While in high school in Florida, London developed his computer skills and worked with various programs that help produce music.

“I got into all of the things that you need now to be self-sufficient in the music industry,” he said.

After a short stint at University of Central Florida, where London spent time dancing with a hip hop college troupe (he said their routines were similar to the Jabbawockeez dance crew), he graduated with a degree in audio engineering from Full Sail University in Orlando in 2008.

London had designs on becoming a recording and mixing engineer, which is the person who “takes what the artist sings and then makes it sound commercially viable.”

He gave the following example: “So if Cardi B comes to me in the studio and she has a rap in her head, I’m going to record what she does in the microphone. I’m going to lay it out and make sure I have kicks, snares, drums, hi-hats, guitars, pianos (in addition to her vocals) and I’m going to put all these things together like a painting, where it sounds like a song.”

That’s the thing — even though the job of a recording engineer is highly technical, London sees himself as an artist, assembling various musical components together to form one unified piece.

“The engineer is the most important person in this entire process,” he said. “You could have Whitney Houston and she could sing an amazing song, but if it’s captured poorly it won’t shine through.”

London moved to Atlanta and interned at Music House Studios to start his career as a recording/mixing engineer. He temporarily lived with a distant cousin before transitioning and actually living inside the studio for several months.

“That was a blast,” London recalled about his time living at Music House, which featured equipment (microphones, speakers), worth hundreds of thousands of dollars.

He spent a lot of time working with variety of artists, including those who perform trap music, a sub-genre of hip hop which originated in the South in the 1990s.

“There’s something infectious and soul stirring about the rhythms, the beats and the drums,” London said about the music.

But it wasn’t easy. Many times he ran out of money and went home to Stanly County, not knowing if he would be able to make it in the music business.

But thanks to his family’s steadfast love and support, he never lost hope.

“I’d just go back into the world and try again,” he says.

After about a year with Music House, London was ultimately promoted to head engineer, where he ran the whole studio. His first client was Big Play Entertainment Records, which included artists like the rapper YC. After the success of YC’s song “Racks” in 2011, the record label gravitated towards London and ultimately hired him to help run their studio in another part of Atlanta.

During his time with Big Play, he helped produce music for some of the biggest performers in the world: Usher, Anita Baker, Nicki Minaj, Lil Wayne, Future and Young Thug. He’s met Alicia Keys but hasn’t collaborated with her, though it’s still on his bucket list.

While he no longer works for Big Play or any specific studio, he is essentially now a freelancer. Groups seek him out and he travels around the country working with studios and performers.

Discovering his own voice

As London was starting out in Atlanta, interning with Music House Studio and learning the ins and outs of what it takes to become a recording engineer, he began to explore his own musical curiosities.

Channeling his love for county music, London went into the recording studio and improvised a song ideally meant for Taylor Swift to sing. He could see an image of Swift in his mind and he just went with it and “talked as if I were her.”

That was his first real foray from the behind-the-scenes work of a recording engineer to the bright lights of a performer.

“It was like, ‘Oh wow, look what I just did. I just wrote a song and it sounds good and maybe she could use this one day,'” London said.

“That’s when I became a songwriter,” he added. 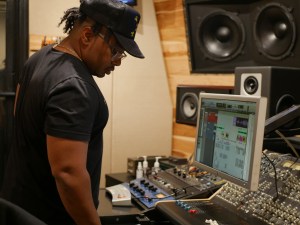 James London in his studio working on Shania Twain’s “You’re Still the One.” Photo courtesy of James London.

And since then, he’s never really slowed down. He creates music on a nearly daily basis, going into the recording studio and free styling whatever’s on his mind. All of his songs are improvised; he never writes out any lyrics beforehand.

While he’s never taken any formal vocal training, London did spend time in West Palm Beach a few years ago learning from the Grammy Award-winning soul and R&B singer Betty Wright, who “helped refine my songwriting process to an even more professional level.”

He calls creating music “one my favorite superpowers.”

His music, he says, mirrors his life and the experiences he’s encountered. London is not confined to one definitive musical genre — he’s produced gospel, R&B, country, island, trap country — because his life has not been confined to one specific location. He takes inspiration from the many places he’s lived (North Carolina, Virginia, Georgia and Florida, along with time in Sardinia, a large Italian island on the Mediterranean Sea) throughout his life.

While not fluent in either Spanish or French, he has incorporated both languages into parts of his songs.

“If I need to know a word or a phrase I’ll go to Google Translate,” he says.

“Every piece of music is a culmination of everywhere I’ve lived,” London said.

Two of his gospel songs — “We Lift Our Hands” and “Hardway — directly feature his grandparents Willie and Christine Cagle, who live in Albemarle. His grandmother sings background vocals in both songs while his grandfather, a preacher, offers prayers.

London’s also recorded music for commercials and movies. One of his songs, “One Night,” appeared in the film, “Charm City Kings,” a coming-of-age-story about a young black kid growing up in Baltimore. The movie was released last October on HBO Max, with actor Will Smith serving as one of the executive producers.

Having one of his songs appearing in such a prominent movie was the culmination of “years of telling my grandparents ‘I almost got something,’ ” he said.

London said being featured in the movie was one of his best accomplishments to date.

He enjoys the unpredictable nature of his pieces, never knowing how they will turn out; he doesn’t even want to know the beats for a specific song until he’s in the studio about to perform.

But he’s largely kept true to his country roots growing up in Stanly County.

“I learned that in the studio, a bunch of rappers go into a booth and open themselves up and just speak,” he said. “But I’m not made of rapper fabric, I’m made of country fabric.”

In an industry where people are often defined by certain musical styles, London embraces the fact that he can’t be easily pigeonholed into a certain genre.

“Increasingly people want me to define me and there’s no definition, but what I can do is bring something forward to the world that I think is at the core of me and who I am,” he said. “I like to add every piece of life that I can find into my music.”

Many of his songs can be found on iTunes under the name LNDN.