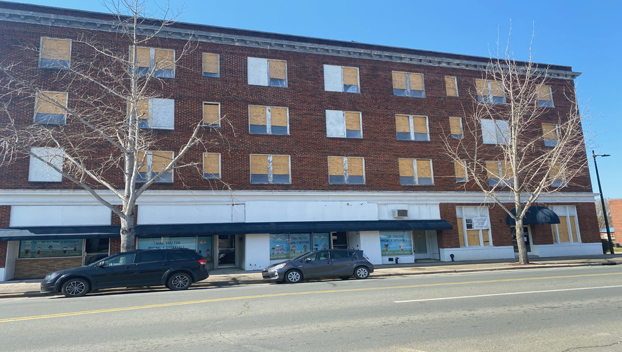 A new project is planned for The Albemarle Hotel in downtown Albemarle. (Photo by CHRIS MILLER/staff)

The Albemarle Hotel has seen better days, but the best may be yet to come for the nearly 100-year-old building.

Developer Jordan Jones and his Durham-based company Anchor & Pillar have plans to convert the building into The Residences at the Albemarle Hotel.

Jones said ideally a restaurant will occupy the more than 4,000-square-foot space where the grand lobby and dining room used to be.

“It’s important to me that they remain accessible to the public and that’s why we’re looking to do a restaurant,” Jones said of the entry area.

He hopes to begin renovations in June and targets a completion date of the summer of 2022.

The building has remained empty for around 20 years. Jones said if he waited five or 10 more years to do this project it would be too late.

The ceilings are falling down and vandalism has happened, Jones said. Most of the building’s windows were recently removed by Double Hung, LLC of Greensboro, which specializes in window restoration.

Jones began looking at the Albemarle Hotel project in 2017. It took around 15 months to complete the approval process since the property is historic.

“The city partnered with Uwharrie Bank and ADDC to hire the School of Government to come down and do a study on the hotel to get this entire process started,” Albemarle Mayor Ronnie Michael said. “We realized early on that we would need downtown housing and in order for the city to revitalize we need people living in the downtown. This housing is a key element in having a vibrant downtown. Restaurants, retail and other amenities will come to the downtown when we have the need for them. Residents in the downtown will create that need.”

“The city is investing in the downtown with expectations of a revitalization,” he said. “We are already seeing investments by individuals in our downtown and expect that to continue for years to come.”

Jones said there are specific requirements through the U.S. Department of Interior and plans must also be submitted to the N.C. Historic Preservation Office and the National Parks Service to show the rehabilitation process.

Besides renovating the wooden single pane glass windows, Jones said he plans to keep the historic corridors of the building and restore any plaster found in the building, particularly in the lobby and dining room.

“All non-historical components will be removed from the building and will be built back from scratch,” Jones said.

The project will cost more than $8 million through private investments and historic tax credit investors. More information on how local investments can benefit the community will be revealed in the coming weeks, Jones said.

Stokes Construction has signed on to do the renovation project, with Jones saying that’s another bonus by keeping jobs local.

“I recognize the important significance of this building in the community,” Jones said. “I’d rather reinvest in small communities like Albemarle.”

Jones’ work has family ties. His company completed The Residence at Prince Charles in a former downtown Fayetteville hotel which was built by his great-grandfather’s company. His mom and aunt were raised in Badin, with his grandfather working at Alcoa.

The Prince Charles project is similar to Albemarle in that the hotel was built in the 1920s, but it has more apartments and retail space than Albemarle Hotel. He has also had projects in Elizabeth City, New Orleans and Winnsboro, South Carolina.