REGIONAL: Poston to retire after 50 years at Wingate 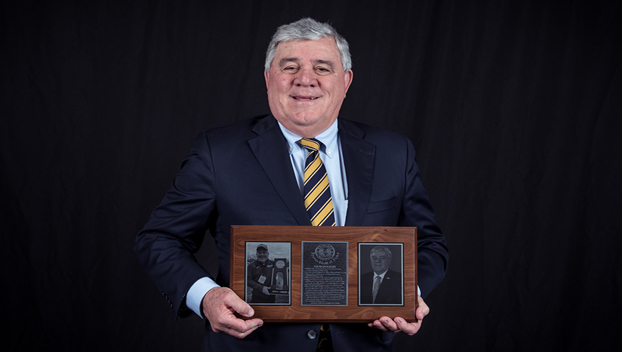 Steve Poston will retire from Wingate this year after nearly 50 years with the college.

The lessons Steve Poston learned in his first job at Wingate Junior College kept feeding his career as he took on other roles and the institution grew into a university: how to forge meaningful relationships, how to excite students about Wingate, how to get the best out of others.

He started as a baseball coach nearly 50 years ago and will retire at the end of this year as vice president and director of athletics (and the University’s longest-tenured administrator ever). In between, Poston held so many different positions that his resume is four pages long.

“I’ve joked that Wingate has been relentless in trying to find a job I can do here,” he says.

It might be more appropriate to ask what job he can’t do. At various times a teacher, recruiter, fundraiser, coach and administrator, Poston will become an adviser to President Rhett Brown in January 2022, working part-time. Wingate will begin the search for Poston’s replacement this spring.

Poston will leave behind a legacy of versatility, loyalty and excellence. Under his leadership the past two decades, it’s fair to say that Wingate Athletics has owned the South Atlantic Conference. Every year, one school receives the Echols Award, which goes to the institution with the best overall athletics program, based on a points system. Wingate has won it the past 13 times it’s been awarded (no award was given in 2020).

In that time, Bulldog teams have played in numerous national tournaments and even won a team national championship (men’s soccer in 2016). One year, all Wingate teams finished in the top four in the conference standings.

“I wanted to build a total athletic department,” says the 74-year-old Poston, who was inducted into the Wingate University Sports Hall of Fame in 2018. “What I’ve tried to do here is make sure all of our sports get an equal opportunity to be successful.”

That means giving adequate financial support to all programs, even those that normally don’t receive much publicity. For Poston, it has also meant increasing the number of women’s sports over the years. During Poston’s time in charge, Wingate has added women’s golf, women’s lacrosse and women’s triathlon, in addition to men’s swimming and indoor and outdoor track for both men and women. Wingate is also exploring the possibility of adding field hockey in 2022.

“Steve will be remembered for the incredible run our athletics programs have had under his leadership – and rightfully so,” Brown says. “Every Bulldog team commands respect from its opponents every time they step on the field, court or track. But in the 30 years before he became athletic director, Steve had already become a part of the fabric of this university in many ways. His knowledge and experience will continue to be invaluable to me.”

Early during his tenure as AD, Poston played a role in changing the course of the University, though it had nothing to do with athletics or with student life (he was vice president for student affairs at the time). Chatting over the fence with his next-door neighbor, Wingate grad and pharmacy chain vice president Larry Raley, Poston learned of a dire need for pharmacists in North Carolina.

Poston mentioned it to Dr. Jerry McGee, Wingate’s president at the time, and Wingate eventually launched a pharmacy school. Poston served on the exploratory task force, accompanying Jack Cole, the consultant the University hired, as they did their due diligence. Poston was the first person to meet Dr. Bob Supernaw, who would eventually build the program as its first dean, and he even suggested using what is now the Neu Building as the initial home for the pharmacy school rather than constructing a brand new building.

“That was a savings of several million dollars,” Poston says. “We were able to buy some time while we were getting pharmacy off the ground.”

‘Once a coach, always a coach’

Pharmacy schools, student life and college administration were far from Poston’s mind when he was hired in 1972 out of Elkin High School, where he taught and coached basketball. Poston found success at Wingate as a young baseball coach, winning a couple of conference titles and a regional title and ushering the program into the senior-college era. But as much as he loved interacting with his players, Poston was destined for administration. Three years after being brought on as coach, Poston was drafted over to help John Cox recruit students while also coaching the baseball team. Until then, Cox’s admissions office was something of a one-man band. Poston proved adept at selling a school that he had fallen in love with.

“I felt like we were one of the premier junior colleges in the country,” he says. “I was confident that if a student came here, they would get what they were hoping for. I was able to feel good about what the product was.”

With former coach Ron Christopher ready to get back into coaching as the ’70s wound down, President Tom Corts approached Poston after his seventh season in charge.

With that, Poston moved into recruitment full-time, eventually becoming vice president for enrollment management, a role he would fill until 1996, when he became director of the Matthews Center, where Wingate’s graduate programs were offered at the time.

A huge figure in the community, Poston has held leadership positions with several nonprofits, including the Union County Community Arts Council and United Way, while also serving in the Monroe Rotary Club, working with Union County Habitat for Humanity and serving on the Lake Park Christian Academy board of trustees. Poston won a HeART of the Arts lifetime achievement award in 2013. He also served four years on the NCAA Division II Management Council, starting in 2011.

All the while, he has continued coaching, just in a different way.

“Once a coach, always a coach,” Poston says. “What I do now, and what I did in admissions, you’re still coaching. You’re just doing it in a different environment and for a different reason. But you’re bringing people along in their development.”

He couldn’t think of a better place to serve as a mentor and leader.

“I get a big lump in my throat when I think about all this coming to an end,” Poston says. “Wingate University has been a blessing to me. I cannot think of a place where I would have had a more enjoyable career and been a part of something that’s so special.”