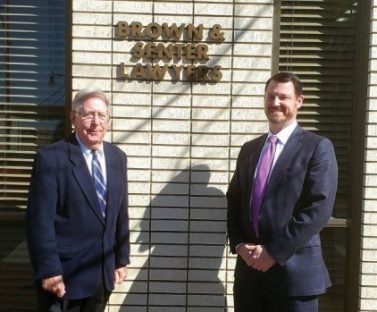 Stanly County’s longest established law firm will undergo change, in name only, and will continue serving Stanly and the surrounding area.

Members of the firm include Charles P. Brown and James L. Senter, both natives of Stanly County.

Brown earned his undergraduate degree in business administration at the University of North Carolina in 1964. He graduated from its law school in 1966, successfully passing the North Carolina Bar examination in August of that year.

Senter attended The Citadel and graduated in May 2004, earning a bachelor of arts degree. Following undergraduate school, he attended the University of North Carolina School of Law and earned his law degree in 2007. In August of that year, he successfully passed the North Carolina Bar exam.

“The idea of restructuring ownership of the firm and changing the firm name has been something that we have discussed over the last couple of years,” Brown said. “Jim and I have focused on this more specifically in the last 12 months. We are equal partners in the firm and are well positioned to move forward serving clients in Stanly County and the surrounding area. I am delighted with our new arrangement; Jim is exceedingly competent. He is a really fine attorney. I am proud to work in partnership with him.”

Continuing, Brown said “we have a strong staff with many years of experience, and we are proud of them as well. Staff members include Vivian Turner and Crystal Layton. Judy Miller, former full-time employee, continues to help the firm on a part-time basis.”

Four generations of Browns have served clients in Stanly County for more than 140 years.

The legacy began in 1878 when James Milton Brown was licensed to practice law and moved to Albemarle to open his firm. Known as J.M. Brown, he had a small frame building which housed his law practice. It stood on East Main Street in Albemarle where the Stanly County Public Library parking lot is now.

Additionally, J.M. Brown built the home at 427 Pee Dee Ave. (across from Christ Episcopal Church) and lived there until his death in 1913.

R.L. Brown Jr. was licensed to practice law in August 1931. He was still a law student at Wake Forest College when he took the bar exam and passed the examination.

Remarkably, he was a licensed attorney who had not yet completed law school. He received his law degree from Wake Forest in May 1932 and then joined his father’s practice. The firm was known as Brown & Brown.

R. Lane Brown III received his law degree from the University of North Carolina and was licensed to practice in 1965. He retired in 2000.

Charles P. Brown, current member of the firm, was awarded the John Motley Morehead Scholarship for undergraduate studies at the University of North Carolina. After graduation, he returned to Albemarle and joined his father.

G. Crawford Rippy III was a member of the firm from 1989 until his retirement in 2016. Connie E. Josey practiced with the firm until the end of last year when she opened her practice on North First Street.

“Jim Senter has given to his church and community in many ways. He has succeeded as a practicing attorney. He is from good stock. I look forward to his continued success.”

Brown and Senter, PLLC is diversified with each member specializing in particular areas of the law. Brown handles estate administration and estate planning together with civil litigation and business-governmental relations. Senter specializes in criminal practice, concentrating in Stanly and surrounding counties. The firm is an A-rated firm, according to Martindale Hubbell, a professional rating firm.

“We have had the honor of serving many individuals, their families and their businesses through the years,” Brown said. “We are deeply indebted to them for the opportunity to help them in the past, and we look forward to doing so in the future. Folks in Stanly and surrounding counties have been mighty good to us. We look forward to continuing to work together on behalf of Stanly County and its citizens.

“I am as proud as I can be of Jim Senter. This partnership makes sense
and I look forward to our practice together for years to come.”

When pressed on the questions of retirement, Brown downplayed the idea, stating “I love to practice law and I don’t plan to quit. Full retirement is not in my plans.”