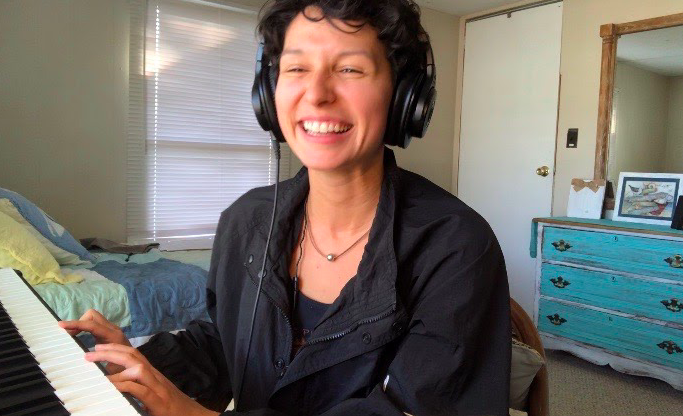 Cassidy Stoner during a session with one of her clients. Last year, she created a virtual coaching studio to help train people in the performing arts. Photo courtesy of Cassidy Stoner.

Albemarle native Cassidy Stoner is used to the hustle and bustle of life on the road.

As a Broadway performer, Stoner spent two years traveling the country in the hit musical “Aladdin,” where she was the understudy to the actress who played Jasmine and also was a swing, covering for eight women in the show whenever one was unable to perform.

Stoner, 26, estimated she worked in 14 states through the first two and a half months of 2020, before the coronavirus pandemic forced her musical — and the profession in general — to come to a screeching halt, which has continued into this year.

Since last March, she has spent the majority of her time holed up in the New York City apartment she shares with her boyfriend, Chris. But the adjustment wasn’t easy. Having been so accustomed to a life on tour, traveling from city to city every few weeks, one of the hardest parts of her post-Aladdin life was simply unpacking all of her stuff.

“It took me forever to fully unpack my suitcases from ‘Aladdin’ and find homes for the things in my home,” she said. “It was bizarre.”

Even though she can no longer physically perform on a stage in front of an adoring crowd, Stoner, a Gray Stone Day School graduate who spent about a decade with Albemarle Academy of Dance, has found a productive new way to channel her passion for musical theater and the performing arts.

From performer to virtual coach

Last spring, she started her own virtual coaching studio, offering voice lessons, acting lessons and college audition prep. She taught a workshop recently with students at the Durham High School for the Arts and was set to teach a master class at High Point University.

“I’ve always had an affinity for teaching and for education,” she said. “I’ve always had a passion for continued learning and instilling the love of arts and how important it is to our society into the development of young artists for a long time.”

Her studio, Go With Me Here, “is a collaborative, virtual space where you can feel safe to play, grow, dig, discover, refine, giggle, work, strive, and endeavor,” according to her website.

Having always wanted to teach in some capacity and with a lot of downtime in her apartment, the pandemic provided her the prime opportunity to connect with people needing help to improve their artistic craft. After receiving positive feedback from people she worked with, she decided to make it her full-time gig.

Stoner teamed up with a friend in the city, who’s also from Stanly County, who helped her create a website, featuring the services she offers and packages people can pay for. After launching her website around October, demand for her services gradually picked up to the point where she’s mentoring around five to seven people on average per week. She interacts with her clients through Zoom and FaceTime.

Stoner offers a variety of services from working with clients on their audition tapes to offering uninterrupted coaching on material of their choice to hosting group workshops. Her clients range from high school students — she regularly works with a student who is active in theater at West Stanly High School — to college performers preparing for auditions to established artists who need a boost.

One of Stoner’s current clients is childhood friend Andrew Allen, who also grew up in the county and is now an actor in Los Angeles. She has worked with him over the past few months on improving his voiceover skills, including articulating certain words and making sure his larynx is stable when speaking.

“I’m certainly biased, but it’s always a blast working with her,” Allen said. “She always tries to find fun and interesting exercises to keep the lessons flowing.” 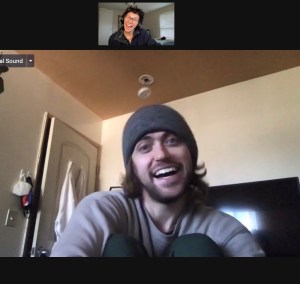 “No matter which session or bundle you choose,” she wrote on her website, “I’m here to help you with any piece of text, monologue, scene, song, or audition side that floats your boat. So long as your piece makes you excited to be an actor, I’m in!”

As a coach, in addition to spending time directly with her clients, Stoner also spends time researching and identifying material (songs, monologues) that would best suit them and their abilities. She also spends considerable time planning each session before she meets with the clients.

“My job as a coach is to find material that fits them like a glove and then coach them on that material,” she says.

Even with her busy schedule helping people better their respective craft, she also still finds time to better her own. Stoner regularly takes acting classes and weekly voice lessons and still periodically applies for TV and film auditions.

“Honestly it’s good practice for me,” she says about continuing to refine her skills. “I spend a lot of time teaching and telling people, ‘So when you do a self-tape for a TV show or anything, this is how you do it.’ It’s good being on the other side of the camera.”

“It’s good practice to stay in it,” she adds.

A nice change of perspective

While Stoner has had to adjust to a totally new way of life throughout the past year, she’s enjoyed being able to help others — though it’s not always been easy.

Figuring out what works for one person is not always the recipe for success for another and Stoner has been learning by trial and error in discovering what is the best approach for each of her clients.

“I’ve always known that I would be some kind of mentor, educator, coach and this pandemic has shown me really that just because you have experience does not make you a good teacher,” she says.

And even with her years of experience on the stage, she admits she initially underestimated how hard it would be to transition from performer to teacher.

“I started this pandemic saying, ‘I’ve been on a Broadway national tour for two years and I have all this experience on my resume. Why shouldn’t I do this? I’m more than qualified to do this. And that’s certainly not the case.

“There was a massive learning curve,” she added, “because what worked for me might not translate to a 14-year-old student.”

But as a performer all her life, the show must go on and Stoner simply adapted and tailored her storytelling approach to better connect with her clients.

The past year has also allowed Stoner the freedom to explore who she is beyond just being defined by her stints as a Broadway performer.

“I was on tour with ‘Aladdin’ for two years and I think my identity was certainly tied to that,” she says, noting the first thing she would often say to other performers she’d meet was that she was a swing with “Aladdin.”

“But obviously that’s not true. That’s not my identity, that’s just the outlet I’m in right now.”

As the pandemic lessened in New York City, Stoner returned twice to Albemarle to visit family, which was a nice respite from being cooped up in her apartment. She’s currently residing with Chris in her family’s property in Oak Island and plans to head back to the Big Apple this month.

Once the pandemic ends, Stoner hopes to return to performing on Broadway in some capacity. In the meantime, she’s enjoying her new normal as an artist and storyteller.

“I think whether there’s a crowd of 2,000 or a crowd of one on Zoom, that does not make me any less of a professional,”she says. “It’s not necessarily the crowd that makes me a successful artist; it’s my values and my drive and my craving for connection and storytelling.