The Stanfield Board of Commissioners conducted their meeting Thursday night outside due to the large crowd in attendance.

The majority of residents were opposed to the rezoning of a tract of land off South Love Chapel Road for a proposed 30-home subdivision. With COVID-19 limitations and as Town Hall is small, the town council’s meeting was conducted by lamplight outside.

Joseph Burleson of Burleson Square LLC first presented the proposed subdivision, which would be adjacent to Pete Henkel Park, to town commissioners in January.

The subdivision would be 17.42 acres and each home would be between 2,000 and 2,400 square feet. About 5.5 acres would be dedicated to the town for the expansion of the park.

Burleson said he expects the average home price to be more than $300,000.

Several members of the community have voiced their displeasure over the past few weeks about the rezoning for the development, citing their concerns that their small town doesn’t need high density housing. Just in the last week, a petition opposing the rezoning effort was created and garnered more than 300 signatures.

In order for the plat to be rezoned, a host of conditions will have to be met including the inclusion of canopy trees and street lights (to be approved by the town), no on-street parking and decrease of required minimum lot width from 90 feet to 70 feet.

When up for discussion, the commissioners were relatively split on whether to pass a motion allowing the plat to be rezoned.

Commissioner James Griffin echoed the concerns of many residents when he said the additional six homes that would accommodate a switch to R-12 “is more or less a benefit to the developer to make more money.”

He added: “We are elected to make decisions for what’s best for the town and our citizens, not to accommodate developers that want to come in.”

Commissioner Faye Love said she was elected to work for the people of Stanfield and the best move in her mind was to adhere to the current R-15 subdivision ordinance and not change it because a new developer wants to add more homes.

Commissioner Jerry Williams was supportive of the rezoning request, saying he “loves this town and wants to see new homes put in it.”

Tensions were quickly ratcheted up when Williams asked those in attendance what they had done lately to improve the town. Though it likely was meant as merely a statement or rhetorical question, many residents quickly answered that coming to this meeting to speak against the rezoning was a sign they cared for the town.

When it came time for a vote, the motion to both approve the rezoning to R-15 and the preliminary plat narrowly passed 3-2. Griffin and Love opposed it while Williams, along with Commissioners Larry Sides and James Kluttz, approved it.

The majority of the public in attendance were angry, not that a subdivision would be built (many agreed that 24 new homes under R-15 would be fine), but that the commissioners made little attempt to reach out to them to let them know about this meeting and last month’s meeting, when an official public hearing on the topic was held.

The public comments portion of the meeting occurred at the end — well after the commissioners had already voted to approve the rezoning. This angered many citizens who believed they were going to be allowed to speak before any decision was actually made.

Town Administrator Bridgette Helms said that Mayor Kevin Barbee has the discretion to decide when the public is allowed to speak during a meeting.

The people who spoke largely accused the commissioners of going against the wishes of the citizens of Stanfield.

“You all did a dereliction of your duty by not listening to these people,” he added. 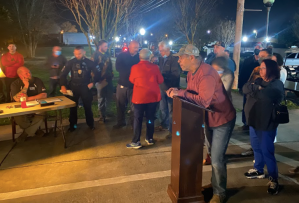 Resident Rhonda Benton, in some of the most blistering comments of the night, suggested the consequences for the commissioners who approved the rezoning would be felt at at the ballot box.

“I hope you enjoy the rest of your term because what you just proved is that you could care less about what the people of Stanfield want for Stanfield,” she said.

“You are not untouchable,” she said, directing her remarks specifically to Barbee and the members who approved the rezoning motion. “You sat here knowing all these people did not want it rezoned and you didn’t care because it’s what you wanted. I don’t care what you want. I voted for you to vote the way I want.”

Around a dozen people spoke, almost all of them voicing their displeasure with the decision. Some struggled to control their emotions, saying how much this decision went against the will of the residents of Stanfield.

Melissa Barnett, whose daughter Allyson helped spread the word about the meeting on social media, felt people were intentionally left uninformed by the commissioners when it came to what was going to be discussed during the meeting.

“The community is not being informed and you all did not want them to be informed,” she told the commissioners. She added that many citizens were under the impression that the public comment section was going to take place before any decisions were made.

Helms said that February’s public hearing regarding the rezoning was publicized weeks in advance, including with mail notices sent to adjoining property owners, an advertisement in the Stanly News & Press and on social media. Board of Commissioner meetings are also always posted in advance on the town’s website.

Planning and Zoning Board Chairwoman Lorrie Castonguay said Burleson has attended every meeting for the past several months. She told the crowd that town meetings are held at the same time each month so “if you all want to be informed, show up and support the town that way.”

Around a dozen supporters of Burleson and his subdivision were in attendance, though most elected not to speak, Burleson said.

While many people may not be happy with the outcome, “we’re going to try and do a nice development and hopefully when they see it, they may change their minds,” Burleson said.