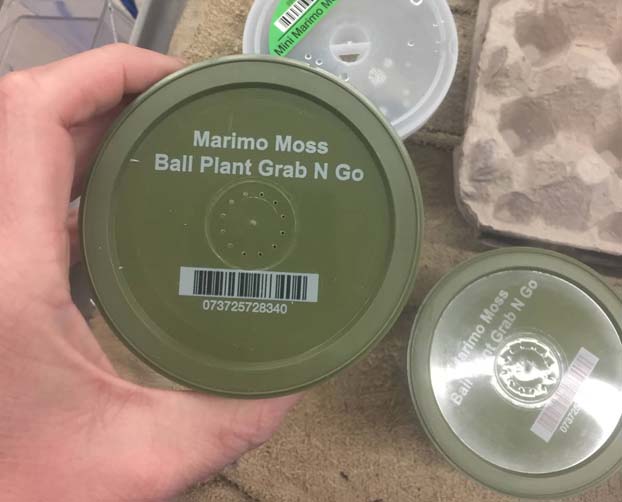 N.C. Wildlife Resources Commission biologists purchased the moss balls from a PetSmart in Burlington. PetSmart is removing the product from shelves but has not shared their plans for disposal. Another national pet supply retailer, Petco, confirmed with Wildlife Commission officials that they are taking the appropriate steps to remove and destroy the moss balls in all its N.C. locations. Other retail outlets, including online retailers like eBay and Amazon, may also be selling contaminated moss. Smaller pet retailers should be diligent in checking their stock, too, officials said.

It is widely believed that the packaging may be branded in several different ways. In an abundance of caution, anyone who has purchased any moss balls in the past month are urged to follow the instructions in the press release below about how to properly destroy them and clean their aquariums.

Retailers who stock this product should remove it from their shelves immediately and contact their headquarters office for disposal instructions or dispose of them as outlined below.

Wildlife Commission law enforcement agents will be visiting every retail pet store in the state with information about zebra mussels and how to deal with this potential threat.

The N.C. Wildlife Resources Commission is warning anyone who has recently purchased aquarium moss balls that they may contain an invasive species of mussel called the zebra mussel and should be carefully discarded immediately.

Friday morning, the Wildlife Commission received notice that it appears the moss balls were imported from Ukraine to a distributor in California that recently shipped contaminated product to pet stores nationwide. The facility that imports the moss balls has been quarantined and all shipments of moss balls have been stopped, according to a news release from Montana Fish, Wildlife & Parks.

A moss ball is a species of green algae that is formed into a ball and is two to five inches in diameter. Moss balls are purchased for home aquariums to help absorb harmful nutrients in the water and limit the growth of undesirable algae.

It is likely that retail outlets that sell the moss balls may be unaware that they are potentially selling a contaminated product with an invasive species. Not only are zebra mussels harmful to other aquatic wildlife, they can also clog water pipes and restrict water supplies.

Fisheries biologist Todd Ewing stated, “The Wildlife Commission has led a concerted effort to keep the species out of the state because of both the negative ecological and commercial impacts. It’s actually illegal to possess zebra mussels in North Carolina.”

If you have recently purchased moss balls, the Commission is urging the public to dispose of them immediately by placing them in a plastic bag and freezing them overnight, boiling them or soaking them overnight in a bleach solution (one cup bleach per gallon of water). The moss balls should then be bagged and disposed of in the trash. Living moss balls or untreated water should not be disposed of in any location where they could reach sewage systems or streams or lakes.

The Commission will work with retail outlets as well as state and federal agencies to monitor the situation. Visit the agency’s website to learn more about aquatic nuisance species.