After woman loses house in fire, her realtor takes to social media to raise support

Katherine Drye lost her Oakboro home in a morning fire just days after moving in. Photo courtesy of Charity Meachum.

Charity Meachum remembers last Tuesday morning quite clearly. She was teaching cosmetology at Stanly Community College when she overheard a student sharing a Snapchat video of a house in Oakboro that had just caught fire.

She was keenly interested because as a realtor with Divine Real Estate Boutique in Oakboro, she had just helped a single mother close on her first house a few days earlier.

“I was like, ‘What are the odds that it would be the house I sold,’ ” the 35-year-old said in a phone interview.

Once she happened to catch the name of the street — North Oak Ridge Road — a sinking feeling crept into her stomach.

When she asked to see the video, her fear was realized. Meachum noticed firefighters standing around a scorched house next to the woods, the same house she sold to Katherine Drye the Friday before. It was the first house Drye had bought, Meachum said.

“My heart sank just because I knew that she was a single mom of three kids,” she said through tears, recalling the traumatic moment.

Meachum quickly called and texted Drye but received no response. She then reached out to Drye’s sister Amanda, who was a longtime friend. Still no response.

She remembered that Drye told her she recently started a new job in Biscoe, but she couldn’t recall the name of the business. So Meachum quickly Googled businesses in the small town and began calling each of them, hoping she could locate Drye.

On the third attempt, Meachum finally spoke with a woman at Grede Foundry, which manufactures iron castings, who confirmed that Drye was an employee and went to get her. After Meachum broke the news of the fire, Drye initially thought it was a prank since the two women often joked with one another.

Once the gravity of the news hit her, Drye described going into “panic mode” because her animals were inside the house.

“I didn’t really care about anything else in the house,” she said, “because everything (else) can be replaced.”

Looking back, Drye is grateful about one thing: She was supposed to have started her new job at Grede on Wednesday, but she had gotten an email from someone at H.R. asking if she could start a day earlier.

“If she wouldn’t have sent me that email, me and my kids would have been in the house when it (the fire) happened,” she said.

After Meachum broke the news to Drye, the two women raced to the house to confirm everything for themselves.

Faulkner said the fire originated in the garage (where all of Drye’s belongings were stored) and was mainly contained there though there was some extension into the rest of the home, including the attic.

“It’s not livable, between the fire damage and water damage,” Faulkner said, adding that the cause of the fire was undetermined.

It took about 11 minutes for the fire personnel to get the blaze under control.

“They did a really good job getting a stop on it,” Faulkner said. 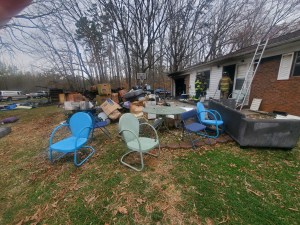 While Drye’s three kids were safe — they were with her mom while she was at work — two of her cats died in the fire. Fortunately her other three pets — a cat, dog and bearded dragon — survived.

Drye is still waiting for the insurance company to get back to her. She hopes the company will be able to explain what caused the fire.

That the fire occurred a day after Drye’s 31st birthday made the incident an even more somber affair.

“When I drove up to the house and I saw everything, I started crying,” Meachum said. “What do you say to someone that just lost everything?”

While words might have eluded her, Meachum quickly pivoted into finding a substantive way to help Drye and her family.

As someone who had been homeless for a time, Meachum empathized with what Drye and her family were going through.

“I didn’t lose my house to a fire, but I knew what it was like to be a single mom of two kids and homeless,” she said, adding that Homes for Hope helped with her recovery. “I know she’s got family, but in a sense, she just lost everything. I’ve been there and I’ve done that.”

Part of Meachum wonders if God intentionally placed her in Drye’s life “because he knew she was going to go through this,” she said.

But her mind quickly went into “help mode” and within a few hours, Meachum took to social media and created a Facebook page, Hope for Katie, to not just shed light on Drye’s plight but also to try and solicit donations from people in the community who would want to help.

“This is the community page to unite and come together to bring back hope for Katie and her 3 kids!” Meachum wrote.

Less than 24 hours after creating the page, people started donating an assortment of items including a couch, a loveseat, a recliner, beds and clothing. Meachum donated 16 bags of clothes. She also plans to reach out to Oakboro Furniture & Mattress to see if it will donate any mattresses.

Oakboro Police Chief T.J. Smith worked with Meachum to open a mini-storage unit in Stanfield to store all of Drye’s new belongings.

“My role has been helping to collect donations,” said Smith, who’s working to create a barbecue benefit dinner to raise money for Drye. “I’ve just been collecting stuff at the police department and taking it down there and dropping it off” at the mini-storage.

Meachum has been amazed at how many people in the community have stepped up to help Drye and her family, but she’s not surprised.

“I knew the outreach that Stanly County has if somebody really wants help,” she said. “I knew everyone would really help out, I’d seen it before.”

“The cool thing about Stanly County is they take care of their own,” Smith added.

Drye has also appreciated the support.

“I was honestly shocked at how much help I was getting,” she said about the past week.

Though extremely grateful, Drye never expected her realtor to go to such lengths to help her family after the fire.

“I figured after closing with the house the realtor would be done…but she just stepped right in and helped me with everything and she’s still helping.” 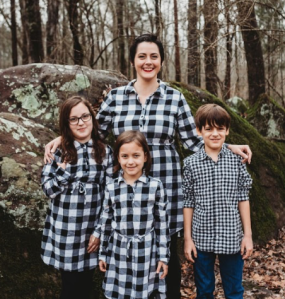 Drye and her kids are currently staying with her mom in Albemarle, but the hope, Meachum says, is to get them into a rental home within a few weeks.

Some of the key items still needed for the family (which are posted on the Facebook page) include: washer/dryer, microwave, eating utensils, plates, towels and cleaning supplies.

Meachum set up an account for Drye at Uwharrie Bank. Checks can be made to Katherine Lee Drye and can be mailed to P.O. Box 338, Albemarle, NC 28002. People can also send money to Drye via PayPal (winterwar423@gmail.com) and gift cards can be dropped off at Divine Real Estate Boutique at 117 N. Main St. in Oakboro.

Even though the past week has been difficult, Drye remains in good spirits. She’s even managed to find a little humor in the situation.

“I’m a firm believer that everything happens for a reason and I’m pretty sure the house got tired of me telling it, ‘I hate the kitchen’ so it took it out for me,” she said with a laugh.