PEEKING INTO THE PAST – Phillips Drug Store 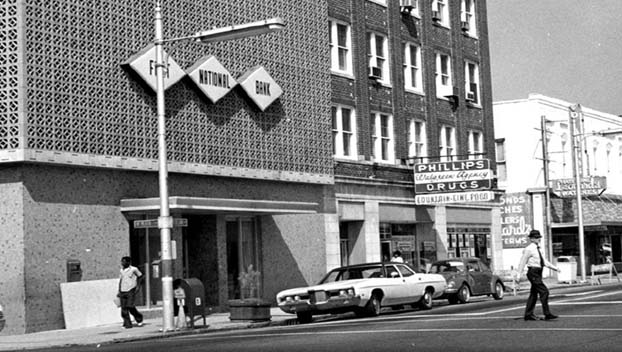 Phillips Drug Store occupied the Hill Building for many years.

Phillips Drug Store in Albemarle had quite an interesting history.

Originally opened in January 1899 by C.J. Mauney and W.T. Lilly as C.J. Mauney and Co., it was located on South Second Street in what is now the Brown and Senter law office building.

The business moved to numerous locations around the downtown area before finally ending up in the Hill Building on North Second Street in early 1926.

Mauney passed away in May 1927, and the business was purchased by W.H. Snuggs, owner of Snuggs Drug Store. After a couple of years, Snuggs decided he did not like managing two similar businesses in the same town. When he was approached by the Moose brothers of Mt. Pleasant, he quickly decided to sell the business to them. On July 1, 1929, the store officially became the A.W. Moose Company.

At some point over the next few years, W.L. Moose bought out his brothers to become sole owner.

In 1968 Phillips sold the store to Tom Yost who continued to use the Phillips name.

Yost was approached by Eckerd Drug Store on several occasions about purchasing the business, and he finally sold to them on Nov. 30, 1983.